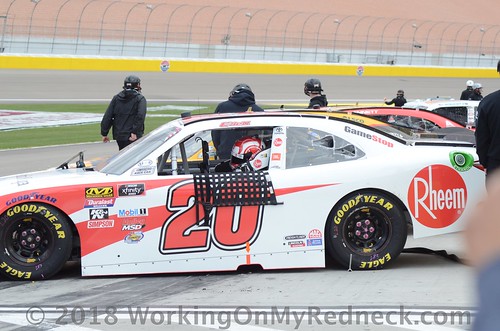 But it won’t be easy.

But Ard never had to deal with the vagaries of a road course. If Bell is to tie the series record, he’ll have to do it not only on a road course but on a road course he had never seen before Friday’s abbreviated practice in the rain at 2.45-mile Watkins Glen.

As a WGI rookie, Bell had to run one lap in the wet, per NASCAR, and that was all he ran, posting an average speed of 82.282 mph, fourth fastest among six drivers who participated in the opening practice session.

Even though a fourth straight victory represents an uphill climb for Bell—and not just through the high-speed esses at WGI—don’t discount his chances.

“I still have the chance to do it,” Bell said on Friday at Watkins Glen. “My car and crew chief (Jason Ratcliff) are great. If anyone else was driving this thing, they would probably be the favorite. But with me and my lack of road course experience, I’m definitely not a favorite heading into this weekend.

“I’ve got the equipment. I’ve got all of the pieces to do it. It’s going to be a matter of me getting familiar with the race track and seeing where we stack up. I’ve never been here before, and I’m going to try to not overstep my boundaries and make sure we race our primary car and not the backup.”

Custer Needs To Get Better At Restarts

Logano Had Tire And Body Damage At Vegas