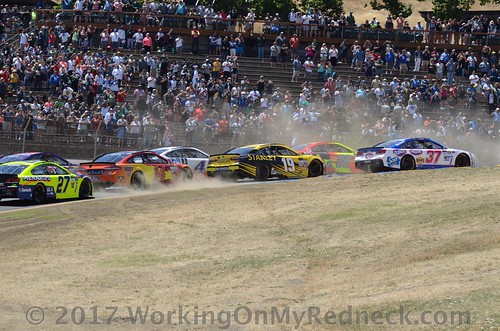 If anyone thought NASCAR’s “Big 3” may slow in the summer heat or suffer from any Victory Lane doldrums, these three drivers proved again over the weekend they are on top of their game.

Kyle Busch won his sixth Monster Energy NASCAR Cup Series race at Pocono Raceway on Sunday with fellow championship contender, six-time winner Kevin Harvick managing a top five after an inspired final laps run up through the field. And the third member of the Big 3 trio, Martin Truex Jr., shows up at Watkins Glen International as the defending winner of this weekend’s road course race, the Go Bowling at the Glen (Sunday, August 5 at 2:30 p.m. ET on NBC, MRN, and SiriusXM NASCAR Radio).

Busch has four road course wins – two at Sonoma and two at Watkins Glen – and won the NASCAR Xfinity Series race at The Glen last summer. Two more times he has led the most laps in the Monster Energy Series race (in 2011 and 2012) on the 2.45-mile circuit and finished third and seventh, respectively. He has 11 top-10 finishes at Watkins Glen in 13 races making him the highest-rated driver there with more than one start.

His victory Sunday gives Busch eight top-five finishes in the last nine races in the No. 18 Joe Gibbs Racing Toyota, including three wins (Charlotte, Chicago, and Pocono). During that time he’s led 538 laps and at least led one lap in eight of the last 10 races.

Next Up: Watkins Glen

With Kevin Harvick and Kyle Busch taking trophies in the last two Monster Energy Series races, the third member of the “Big 3,” Martin Truex Jr. may legitimately feel his time in Victory Lane is next. The driver of the No. 78 Furniture Row Racing Toyota is the defending winner at Watkins Glen after all, and has top-10 finishes in his last two races there – seven top 10s in 12 starts total.

History shows that any repeat win at The Glen is quite difficult, however. No current driver has ever accomplished the feat. Cup favorite Marcos Ambrose, who returned to race in his native Australia, is the last to win back-to-back races in 2011-12.

Although Truex finished a subpar-for-him 15th at Pocono on Sunday, he has nine top-five finishes in the last 11 races including three wins. Since his Pocono win earlier this summer (eight races ago) he has led 370 laps or 57 percent of the laps he’s led on the year.

Harvick, however, is clearly putting up career numbers in 2018. The driver of the No. 4 Stewart-Haas Racing Ford has seven top-five finishes in the last eight races, including a win at New Hampshire two weeks ago and a pair of runner-up finishes at Michigan and the series’ first road course in Sonoma.