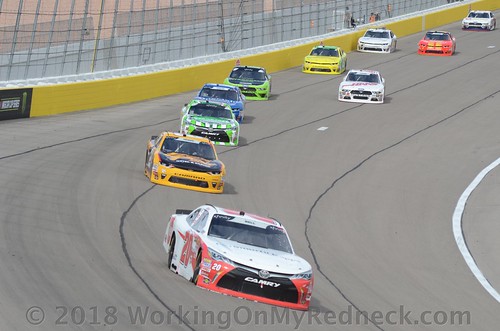 Joe Gibbs Racing’s Christopher Bell has quickly elevated himself to be one of the favorites to win the NASCAR Xfinity Series title this season as the 23-year-old from Norman, Oklahoma, rattled off his third consecutive win last weekend at Iowa Speedway. With four total wins on the year (Richmond, Kentucky, New Hampshire and Iowa-2), the Sunoco Rookie standout now has the opportunity to etch his name in the record books twice with a win this weekend in the Zippo 200 at the Glen. Catch Bell in action at Watkins Glen International on Saturday, August 4 at 3:30 p.m. ET on NBC.

If Bell takes home the checkered flag at Watkins Glen, it will be his fourth consecutive win this season. The feat would tie him with Sam Ard for the series-most consecutive wins. Ard set the record 35 years ago, back in 1983, when he won four straight at South Boston, Martinsville, Rougemont, and Charlotte Motor Speedway.

A win this weekend at Watkins Glen would also be Bell’s fifth on the year; which would tie him with Greg Biffle (2001), Kyle Busch (2004) and Carl Edwards (2005) for the series-most wins by a Sunoco Rookie of the Year contender with five victories each.

Bell currently holds the NASCAR Xfinity Series standings lead by 16 points over JR Motorsport’s driver Elliott Sadler in second, and 18 points ahead of Stewart-Haas Racing’s Cole Custer in third. Through 19 starts, the rising star has posted four wins (series-most), 12 top fives (series-most) and four stage wins (tied with Sadler and Justin Allgaier for series-most). On top of all that, he has accumulated 24 Playoff points thus far this season; which is 16 more than his nearest competitor – Justin Allgaier with eight Playoff points.

Bell will have his work cut out for him this weekend, as it will be his series track debut at Watkins Glen International. A dirt racer at heart, Bell has limited experience on road courses in NASCAR’s national series. His lone Xfinity Series career road course start came at Road America last season, where he started fourth but finished 19th.