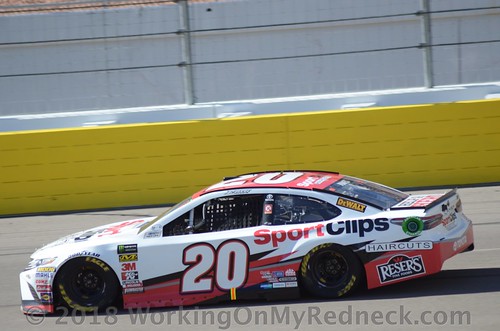 Erik Jones made an all-or-nothing move in an overtime restart in Sunday’s Gander Outdoors 400 at Pocono Raceway.

Teammate Kyle Busch led the field to green on Lap 163, with another teammate, Daniel Suarez, to his inside. Rather than push Suarez, Jones opted to take Busch and Suarez three-wide into Turn 1, but pinned to the inside, Jones ultimately slipped back to fifth at the finish.

“I think at that point, if I stayed and pushed the 19 (Suarez), I run the same spot I do now,” Jones said. “I mean, if we make the move we did, we at least had a shot, and we have a chance to go down there and clear, so we had to do what we had to do to win, and that was our one chance in the Reser’s Camry.

“It just didn’t work out, so still, a good, top-five day. We ran up in the top-five all day and just had a good car, so need to probably be a little bit better. I think the 4 (Kevin Harvick) was the class of the field today, but, you know, it was good to run up there in the top five and lead some laps.”

With Busch winning, Suarez running second and Denny Hamlin finishing 10th, Joe Gibbs Racing placed all four of its cars in the top 10.