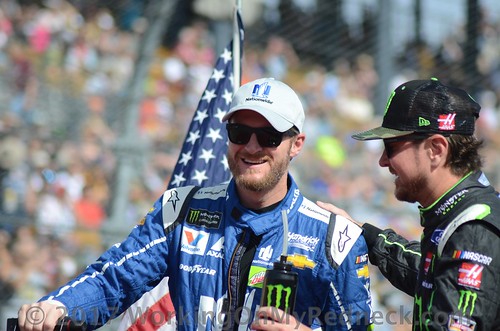 As has been for the past four years, The Dale Jr. Foundation will support Nationwide Children’s Hospital with a Driven to Give Gloves program, but this year the program features 32 NASCAR Cup Series drivers and all four of JR Motorsports’ NASCAR Xfinity Series drivers, Dale Earnhardt Jr. announced today.

During the Watkins Glen race weekend, 36 Cup and Xfinity drivers will wear Dale Jr.-inspired skeleton gloves to raise awareness and funds for Nationwide Children’s. Each pair of gloves will be signed by the driver wearing them during the race weekend and by Dale Jr. before going up for auction on Aug. 8, 2018. The Driven to Give Glove proceeds will benefit the Dale and Amy Earnhardt Fund at Nationwide Children’s which supports the courageous patients and their families in the area of pediatric injury rehabilitation, research and prevention. For more information on the Dale and Amy Earnhardt Fund, click here.

Nationwide, a longtime partner of Earnhardt Jr. and the entire Earnhardt family, revealed a butterfly-themed paint scheme featuring Nationwide Children’s for the Watkins Glen race on Aug. 5, with the driver of the No. 88 Hendrick Motorsports Chevrolet, Alex Bowman, and Patient Champion Ashyzia Jackson.

“We’ve done a lot with the Gloves program through the years at The Dale Jr. Foundation, but this year we wanted to open it up to more people,” said Earnhardt Jr. of the program. “To have 32 of my former competitors and all four of our JR Motorsports’ drivers sign on to this to help the Nationwide Children’s Hospital continue the life-saving work they do there is impressive, and I can’t thank them all enough. Nationwide Children’s Hospital is a huge part of the work we do at The Foundation.”

In its history, the Driven to Give Gloves program has raised more than $100,000 for Nationwide Children’s.

One of Nationwide Children’s Hospital’s Patient Champions, Bricen Thall of West Winfield, New York, will be joined by his family for a weekend at Watkins Glen International that will let them get up-close and behind the scenes at the storied track. Bricen, who was born with a condition known as Hirschsprung’s Disease, had his first surgery at just one week old. The next two years of his life included many procedures, surgeries and hospitalizations. Unfortunately, success from each surgery only lasted for a short period of time.

Doctors referred him to the Center for Colorectal and Pelvic Reconstruction at Nationwide Children’s and, after more surgeries and many health challenges, he is now enjoying the world around him in a way that doctors could not promise when his journey first began. For the first time in his life, he has gone an entire year without any hospital stays.

“Nationwide Children’s has a very special place in our hearts for everything they have done for Bricen,” said his mother, Colby Thall. “They have given him a better quality of life and the chance to experience all that a 5-year-old should.”

Bricen and his family will receive the red-carpet treatment at Watkins Glen. Each year, Nationwide chooses a patient to represent all of the many patients who are treated at Nationwide Children’s. The Patient Champion Program was created as a way to tell the story of the work that is being done at the hospital.

ABOUT THE DALE JR FOUNDATION:
The Dale Jr. Foundation is a charity dedicated to giving underprivileged individuals with a focus on youth, the resources to improve their confidence and education, and the opportunity to achieve extraordinary goals. The Dale Jr. Foundation has made a monumental impact in the local community since its beginning.  Dedicated to giving underprivileged individuals, with a focus on youth, the resources to achieve extraordinary goals, TDJF has contributed to more than 300 charities nationally and locally, including The Make-A-Wish Foundation, Blessings in a Backpack, Ronald McDonald House of Charlotte, Nationwide Children’s Hospital, Ace and TJ’s Grin Kids, and Mooresville Christian Mission. For more information, visit www.thedalejrfoundation.org.
ABOUT NATIONWIDE CHILDREN’S HOSPITAL:
Named to the Top 10 Honor Roll on U.S. News & World Report ‘s 2018-19 list of “Best Children’s Hospitals,” Nationwide Children’s Hospital is one of America’s largest not-for-profit freestanding pediatric healthcare systems providing wellness, preventive, diagnostic, treatment and rehabilitative care for infants, children and adolescents, as well as adult patients with congenital disease. Nationwide Children’s has a staff of more than 13,000 providing state-of-the-art pediatric care during more than 1.4 million patient visits annually. As home to the Department of Pediatrics of The Ohio State University College of Medicine, Nationwide Children’s physicians train the next generation of pediatricians and pediatric specialists. The Research Institute at Nationwide Children’s Hospital is one of the Top 10 National Institutes of Health-funded freestanding pediatric research facilities. More information is available at NationwideChildrens.org.
TIL NEXT TIME, I AM STILL WORKING ON MY REDNECK!

A Top Five At Kentucky For Chase Briscoe