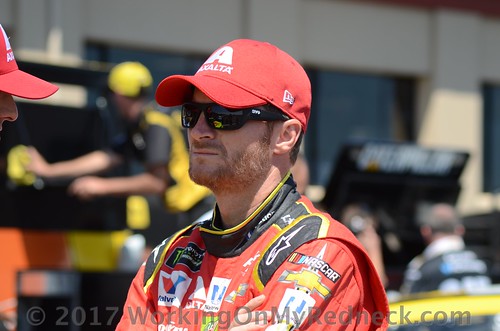 This week NASCAR fans are eagerly anticipating the return of Chicagoland Speedway (3:30 p.m. ET on NBCSN, MRN, SiriusXM NASCAR Radio) summer action and it’s fair to say, they are equally as excited about who will help narrate the story – the sport’s 15-time Most Popular Driver, Dale Earnhardt Jr.

After stepping away from the driver’s seat on a full-time basis following the 2017 Monster Energy NASCAR Cup Series season finale at Miami, Earnhardt has essentially been preparing to make his television debut in the NBC Sports announcing booth – a career move that looks promising for both Earnhardt and the sport’s rabid fandom.

Earnhardt has already put in work during the network’s Winter Olympics broadcasts and been a frequent contributor to its weekday NASCAR show segments. Having the latter half of the season on-air has, in a sense, given him plenty of time to adjust to his new off-track reality and to prepare for his new on-air role.

FOX Sports officially hands the NASCAR race broadcast ball off this week to NBC and its highly-anticipated new hire. So just for good measure and maximum star shine, NASCAR’s favorite son will continue to help promote the changeover – for example, appearing on Megyn Kelly TODAY, the Dan Patrick Show, E! News and the Tonight Show. … all on Wednesday.

Since his last Cup race Junior has been similarly BUSY, essentially juggling the “Good Life” and preparing for the “TV Life.”

His gig with NBC Sports has included time on television at the NHL Finals and he and his wife Amy were featured in a four-part show with DIY Network showing the renovation of their Key West home.

He saw his long-time and hugely popular “Dale Jr. Download” podcast get picked up for television by NBCSN, and he has spent a lot of thoughtful time on social media offering insight and opinions on things from the benefits of iRacing to helpful baby swing elevation angles.

He and his JR Motorsports NASCAR Xfinity Series team celebrated its impressive 40th win, courtesy of Justin Allgaier at Iowa Speedway two weeks ago. And Earnhardt donned a dress suit to cut the ribbon officially opening another of his Whiskey River restaurant franchises at the RDU International Airport.

It’s been a big few years in Junior’s life, from stepping away from the driver’s seat full-time, to marrying his long-time love Amy on New Year’s Eve 2016, to welcoming their first child, daughter Isla Rose just this April 30.

If you thought Junior would be bored and longing to take a green flag after 19 years of NASCAR competition highlighted by back-to-back Xfinity championships and two Daytona 500 victories. … well, that hasn’t necessarily been the case.

Instead, beginning this weekend, he will be talking, evaluating and prognosticating as his former competitors take the green flag. And by all accounts, it’s difficult to determine who is more excited about this – Junior or the NASCAR fans.

It’s all good. He seems so genuinely thrilled and at peace about this next chapter in his life.

Even in the months just prior to his final Cup race last fall, the world saw a different Dale Jr. There was a distinctive new openness with how he spoke and what he felt comfortable speaking about. It revealed an admirable vulnerability in a superstar athlete willing to pursue a new line of work while still in his prime – still so beloved.

The outstanding news for NBC Sports is that this already tested and true relationship between Junior and NASCAR fans looks to translate wonderfully to the television screen.

The shy burgeoning superstar that first burst onto the scene in his early 20s has admirably and graciously grown up and transformed into a bona fide expert who will be interesting and entertaining to listen to – something any television network would be grateful to have in its wheelhouse. His presence and personality should translate well into the broadcast booth, where he’s already shown a willingness to be candid and honest and the drive to be insightful.

It’s a strong and vital connection between Earnhardt and the sport he loves. And the fans, who have long kept him in their hearts, couldn’t be more eager for the opportunity to simultaneously welcome their hero back to the track and into their homes.