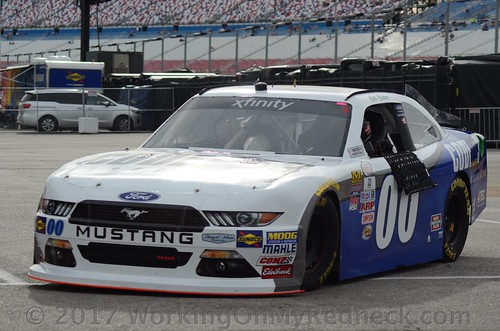 ● After a caution on lap 17, Custer powered the Code 3 Associates Mustang to second place.

● On the final lap, Custer ran door-to-door with the leader, but fell out of the draft and lost two positions.

● At the conclusion of the stage, Custer pitted for two tires and fuel. He was the first car to exit pit road.

● After a lap-45 caution, Custer fell out of the draft with no help from behind and landed in the 20th position.

● He opted not to pit after a lap-55 caution and restarted in ninth place.

● He also stayed out of the pits at the conclusion of the stage.

● Custer battled in and around the top-five and survived multiple caution periods in the final stage.

● After a caution for rain, Custer held the Code 3 Mustang in third place before continuous rain ended the race.

● Due to inclement weather, qualifying was canceled and the field was set by owner points.

● This marks Custer’s second Xfinity Series top-10 at Michigan and 10th top-10 of the season.

● This marks Custer’s first Xfinity Series top-five at Michigan and fourth top-five of the season.

Cole Custer, driver of the No. 00 Code 3 Associates Ford Mustang for Stewart-Haas Racing With Biagi-DenBeste:

“Today we were just in the right place at the right time and had a great strategy. I think my crew chief (Jeff Meendering) had a great strategy and got us track position at the end. Our Code 3 Ford Mustang was pretty solid. It was hard to pass and you didn’t want to be on the bottom. We had some things go our way and ended up third there.”

The next event on the NASCAR Xfinity Series schedule is the Iowa 250 presented by Enogen on Sunday, June 17 at Iowa Speedway in Newton, IA.