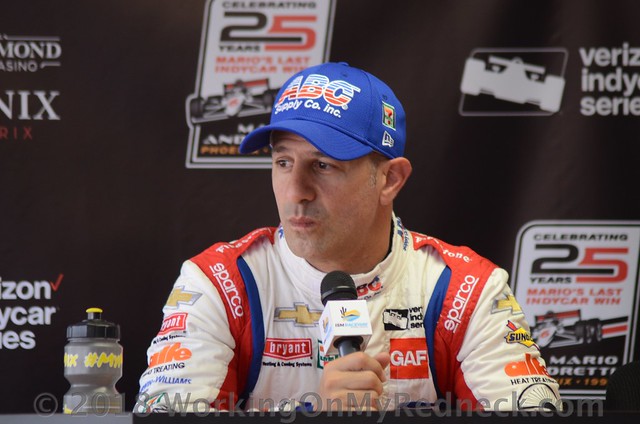 Indianapolis 500 champion Tony Kanaan and rookie Matheus “Matt” Leist claimed their own “front row” spots when they qualified 10th and 11th for the Indianapolis 500. James Davison exceeded his expectations when he qualified 19th in the No. 33 Jonathan Byrd’s 502 East Chevrolet.

The ABC Supply Chevrolets were the fastest of the 24 cars that set the grid from positions 10 through 33.  The first three rows or Fast 9 were set in a separate qualifying segment with Ed Carpenter earning his third Verizon IndyCar Series P-1 award here with a speed of 229.618 mph. Simon Pagenaud and Will Power complete the front row.

Unfortunately for Leist, one of them was his teammate who had been fast all month.

Kanaan posted a faster first lap (227.745mph) and a faster last lap (227.680) than Leist to put Kanaan’s 227.644mph average at the top of the speed chart. The two ABC Supply Chevrolets will start on the inside and middle of the fourth row.

“It was a great day for us, a great team effort,” said the Brazilian veteran, who will be making his 17th Indy 500 start and 349th IndyCar start on Memorial Day weekend. “We missed the Fast 9 by just a little Saturday but that’s the way it is. Having A.J. tell me all the examples he’s been through made me calm down last night. Awesome effort–that’s what we had to do. Tenth and eleventh was the best we could do and that’s what we did.

“I have to thank A.J. and Larry because they bought two brand new cars for me and Matheus. Matheus is fastest rookie. His success is obviously really rewarding to me, I’m working really close with him. Like I’ve said before, I better step up my game because he is coming fast. The more he learns, the more he is going to beat me so I’ve got to keep an eye on him.” 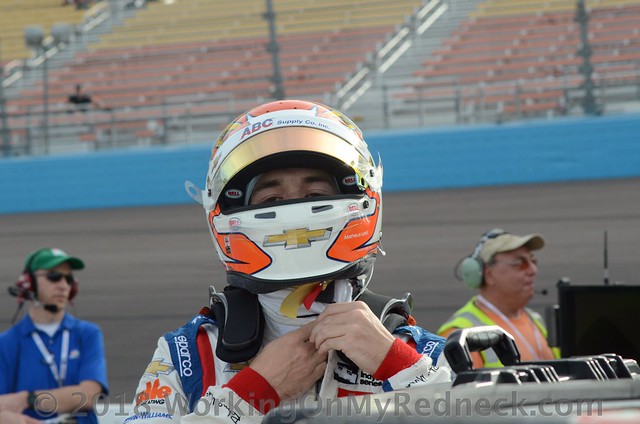 Leist seemed unphased to be outrun by his teammate and mentor Kanaan.

“Since our first day here, the ABC car has been quick,” said Leist, who is the fastest rookie in qualifying. “We knew that we could have a fast car today. I’m so happy for the team and for Tony. Both crews did an awesome job preparing us for qualifying. We were just fast. I think that if qualifying was yesterday and we had this car, we would probably be in the Fast 9. I’m just so happy for this team. Everyone deserves it. I’m looking forward to the race now.”

Davison was the first to qualify because the grid from Saturday’s times was inverted to determine Sunday’s qualification order; being the 33rd quickest meant Davison took to the track first.

His first lap was over 227 mph, and it was the fastest that he ran at the Speedway this month. His speed on subsequent laps dropped slightly, and he averaged 226.255mph over the four-lap run. He will start on the inside of the seventh row.

“It’s been an incredible weekend for the team after our mishap on Friday,” said Davison who spun coming out of Turn 2 and crashed in practice on Fast Friday. “We had to endure a very long night, obviously it’s always depressing when you have a crashed car around here. We punched above our weight on Bump Day, and got ourselves in the race but didn’t show our hand. We really laid it down on Pole Day to move from 33rd to 19th. It’s basically two days in a row the team has been rewarded for their hard work, making the show and moving up 14 positions on the grid. Unexpected results are always really nice in motorsports and we got that today with our improvement, substantially. Just very proud of the entire team and want to keep the momentum going next week.”

Perhaps no one was as thrilled with the outcome as Larry Foyt, president of A.J. Foyt Enterprise.

“I couldn’t be happier with our team today,” Foyt said. “This year has been an unbelievable amount of work for our mechanics and engineers, and it’s nice to see the effort is paying dividends. We qualified the best we could, and put ourselves in decent starting spots. Now we focus on our race setups. We have a couple practice days left to prepare and we are excited to see what we can do for this 500.”

A.J. Foyt, who qualified 12th as the fastest rookie here sixty years ago, said, “I was really proud of both ABC cars qualifying as high as they could and the other car moved up 14 spots from 33rd yesterday. So I was real happy for all three drivers and I think we’ll have a great race come race day if nobody gets in trouble because we’ve got some fast race cars.”

“We did a lot of testing, really worked hard, and went to the shaker rig and every test we could go to this past winter,” Foyt explained. “We ran pretty fast in the test here and I’m just glad it paid off for the crew because they were working night and day for this race. Let’s just hope we have a good day on race day.”

Race day is Sunday, May 27th. The pre-race coverage on ABC-TV begins at 11 a.m. ET with the 200 lapper around the 2.5 mile Indianapolis Motor Speedway starting slightly after 12 p.m. ET.