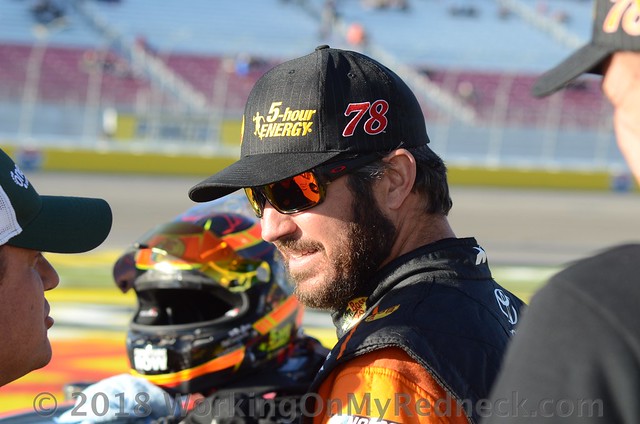 After a dismal two weeks that saw the No. 78 Furniture Row Racing Toyota of reigning Monster Energy NASCAR Cup Series champion Martin Truex Jr. crash out of races at Texas and Bristol, Truex found a welcome stroke of success on Friday at Richmond Raceway.

The Busch Pole Award was the third of the season for Truex, who will make his 450th career start in the Cup series on Saturday. The pole is his first at the .75-mile short track and the 18th of his career.

Truex was happy for the rebound from the calamities of the two previous races.

“You can’t let those kinds of things get you down,” said Truex, who has turned pole wins into race wins in two of his last three attempts (October 2017 at Kansas and March 2018 at Fontana). “It was nothing we did. It was just circumstances. But I’m proud of the effort today. Everybody did a great job, we stayed focused on our plan, and it worked out.”

A standout on 1.5-mile intermediate speedways, where he has collected nine of his 16 career wins and seven of his last nine, Truex is still seeking his first victory on a short track.

“If we’ve ever going to get that short-track win, I feel like this is the place to do it,” Truex said. “We’re excited about Saturday night, and starting out front definitely helps.”

Starting on the front row for the first time this season, Elliott placed more weight on one of the perks of an outstanding qualifying effort.

“I think more than the front row is the pit stall selection,” said Elliott, who will get second pick behind Truex. “Obviously, we know Martin will be good. He ran really well here both races last year. I would have loved to have had that first pit stall.

“We were just talking (about it being) so frustrating to be so close to something once again. Just trying to finish stuff off, and I think that obviously would have loved to have gotten the pole, but starting second is plenty good enough to run well in the race, so we will see.”

Kyle Larson and Kurt Busch were fifth and sixth, respectively.

For a race that could extend his Cup winning streak to three events, Kyle Busch and his No. 18 Joe Gibbs Racing team were overly conservative in the first round, posting the 32nd fastest speed and failing to advance.

“We didn’t make a mock-run in practice, and we thought the spread would be about three-tenths,” Busch said. “…A bunch of those guys ran three laps, and obviously, we needed that third lap. It would have picked up. For some reason the tire here today, even in race trim, your fastest lap was the seventh lap. It takes a while for everything to come in, and we were trying to shortcut it a little bit and didn’t work out for us. So we’ll come from the way far back.”

Likewise Brad Keselowski, with a career-average starting spot of 9.8 at Richmond, failed to survive the first round. He’ll start 28th on Saturday night. Excitement Builds For The Road Race At Daytona