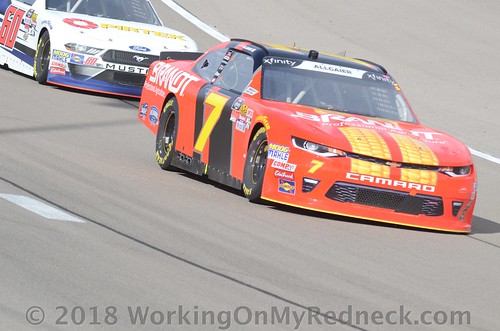 The good news about the flange-fit body in the NASCAR Xfinity Series this year, as JR Motorsports driver Justin Allgaier put it, the transition from sheet metal bodies has been a smooth one.

Asked whether there were noticeable differences that accompanied the change, Allgaier said, “As far as the fundamentals go, no, not really.

“We do the same things when we go to the race track. The inspection line is the same, albeit probably a little bit harder if you’re out of tolerance … it’s harder to put yourself back into tolerance because the bodies are not as pliable.

“And the amount of bracing that we have is way different. We’re kind of stuck in a box with where the braces have to be at. It puts it on the guys at the shop a lot more to have everything where it needs to be.”

NASCAR’s new Optical Scanning Station has put the onus on the race teams to make sure the bodies conform to the rules before they’re unloaded at the race track.

“I think everybody’s kind of going through that,” Allgaier said. “But, for us, the one thing that’s been nice is that the composite body has been pretty seamless, as far as just introducing it and rolling it out.

“It takes a lot of work to make it seamless, but all the teams have put the effort and the time into it, and it seems like it’s working out really well.”