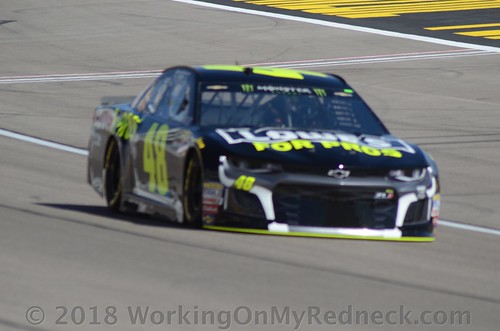 That was the brief consensus when Jimmie Johnson shot to the top of the speed chart in the first round of Friday’s knockout qualifying session at ISM Raceway.

But the seven-time champion’s stint at the front of the field was short-lived. In the second round, Johnson was 17th fastest and failed to advance to the final round.

“I kind of look back to the amount of practice we had today. We only had 20 minutes practice because of the issues we had in Las Vegas, and I never had a chance to go out on scuffed tires to see what adjustments we had to make,” Johnson said.

Johnson’s car failed pre-race inspection three times at Las Vegas Motor Speedway, and the team lost 30 minutes of practice time in the one session before qualifying on Friday. That left no time for the No. 48 Chevrolet team to make any runs on scuffs.

“I had two runs on stickers in practice, and we clearly dialed that part of the car in, and it would have been nice just to have a scuff run to go out and understand what exactly to do. I’m very optimistic with the speed in the car in that first round and look forward to a full practice session or two (Saturday) and dial this Lowe’s for Pros Chevy in.”