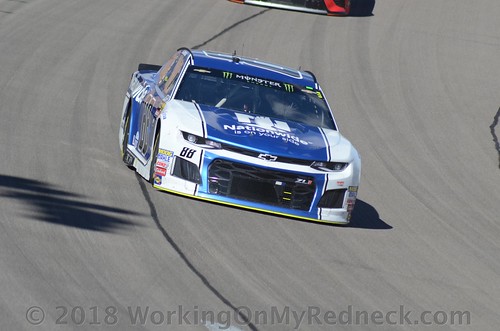 This weekend’s arrival in his home state for Sunday’s TicketGuardian 500  at ISM Raceway (formally Phoenix International Raceway) in Phoenix, is a sentimental first for Hendrick Motorsports driver Alex Bowman.

It isn’t his first start in the Monster Energy NASCAR Cup Series on the 1-mile oval and it’s not even his first drive in the iconic No. 88 Hendrick Chevrolet Camaro. But it is the first time Bowman, 25, has driven this car as his own, set to take the green flag in a competitive opportunity at his home track.

“Don’t really get to spend a lot of time out here. It’s definitely an enjoyable trip. I really enjoy this racetrack too. Pretty successful here, wish we could close races a little better here.

“We have run really well here in the Xfinity Series and in the Cup Series. Just never been able to close one off. Hopefully, that all changes this weekend.”

Filling in for a then-injured Dale Earnhardt Jr. two seasons ago in the Phoenix Fall race, Bowman scored his first ever Cup pole position and led an impressive 194 of the 324 laps on his way to a sixth-place finish – his first top-20 showing there. The pole position and the finish career-best too.

It wasn’t just good for the heart, it was the ultimate chance to prove he could do big things with the right opportunity. And Hendrick Motorsports is the ultimate opportunity. After being named to take over the No. 88 when Earnhardt retired at the end of last season, Bowman’s career has taken a new avenue and the prospects are now in line with his expectation.

He won the pole and led 13 laps in the season-opening Daytona 500, but was sidelined after being caught up in an accident. He has added finishes of 20th (Atlanta) and 16th (Las Vegas) since and is actually the highest ranked driver in the four-car Hendrick stable  — 17th in the standings – coming to Phoenix.

“Well, Daytona went well,’’ Bowman said. “We had a really fast racecar and contended all day and then got caught up in a wreck at the end. There is really nothing you can do there. But you know, other than that, we have not run how we expect and how we want to run.

“It hasn’t been a great start for us. I think we unloaded at Atlanta and quickly realized that we have a lot of work to do. We’ve got the best guys in the business back at the shop working hard. We made progress last week.  We were definitely better last week. We didn’t get the finish that we would have hoped for, but we are making progress.

“To start the year, we are behind what we expected to be, but like I said before, there is such a depth of really smart people at Hendrick Motorsports that I’m confident that we will be contending for race wins soon.”

Interestingly, Bowman doesn’t necessarily consider his home track a particularly “best” shot for his first trip to Cup’s victory circle. His best NASCAR finish on it is a runner-up in a 2011 NASCAR K&N West Series race there when Bowman was only 18 years old. But the sixth place here two years ago gives him reason to smile. He remains optimistic about his chances this weekend. His last time behind the wheel of this car at Phoenix produced a career highlight reel. At last, he is in the ride of his life and there has never been a better time – or frankly, locale — to seize this opportunity.

“Absolutely, we have a notebook of what I liked here and a really good one at that,’’ Bowman said of making his first “return” trip to a track driving a Hendrick car.

“We were really fast here before,’’ he said. “I think it’s a positive. We’ve got some changes. The racecar has changed, we have the new car in the Camaro ZL1.

“A lot has changed, but at the same time at least we have something to kind of look back on and look at what changes I liked and didn’t like throughout practice and where our car was strong and where we needed work.

“I think it’s always good to have that notebook to lean on and especially here with as good of a notebook as we’ve had.”