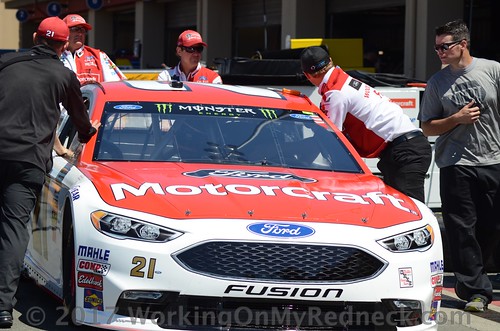 Paul Menard and the No. 21 Motorcraft/Quick Lane team are heading to Las Vegas Motor Speedway for Sunday’s Pennzoil 400 with an optimistic air about the team.

In his first two races since joining the Wood Brothers team, Menard has finishes of sixth at Daytona and 17th at Atlanta, which have him in ninth place in the Monster Energy Cup standings.

Also in the plus column for the team is the fact that Menard and the No. 21 team had a successful test at Las Vegas in January.

“The test was a huge help in getting acclimated,” Menard said. “It was my first time in a car since Homestead last November.”

“It was my first time working with [crew chief] Greg Erwin, and the first time I’d been in a Ford in years.”

Menard raced Fords for Yates Racing in 2009 and for Richard Petty Motorsports in 2010.

He also said the speed his No. 21 Ford Fusion had at Atlanta has him feeling good about Las Vegas, where he has one top-five and three top-10 finishes in 11 career starts.

In the final practice session at Atlanta, Menard was third fastest overall and had the third-best 10-consecutive-lap average speed.

“We had an issue in the race that kept us from getting the finish we wanted, but we found some things that will apply to Las Vegas,” Menard said. “I think we’re in pretty decent shape heading into this weekend.”

Menard said he also feels good about pit road, where teams have been limited to five crew members (from six in previous years) over the wall.

“Our pit stops were really good at Atlanta,” he said. “At Daytona, it was mostly two-tire stops, so you really couldn’t tell anything.”

“But at Atlanta it was four tires every time, and my guys really nailed it.”