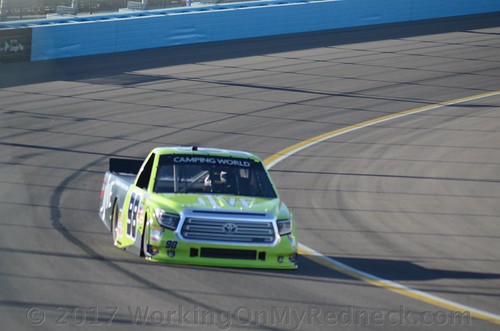 Team Info/Stats:
Crew Chief: Jeff Hensley
Driver Point Standings: 3rd
Owner Point Standings: 3rd
Spotter: David Pepper
News and Notes:
Chatting with Grant Enfinger…The Truck Series has only raced in Vegas in the fall. What changes do you expect from the track and how will that affect the handling in your Ford F-150?
“I would expect a little bit more grip in the track this race because the temps should be a little cooler. Other than that, I don’t anticipate any huge changes.”
You had a top-10 run at LVMS last fall but mentioned that you had a shot to win it there at the end. With your solid start to the season, what are your expectations for this race?
“We’ve had a decent start to the year and have already made some improvements from last year. I’m expecting to unload off the hauler really good and be in contention for the win with our F-150 Friday night. The past month and a half is just a huge testament to the hard work and dedication everyone has put in at ThorSport Racing. A lot has happened since Homestead last year, and no one gave up – we’ve brought some fast, tough, Ford F-150’s to the track each week.”
TIL NEXT TIME, I AM STILL WORKING ON MY REDNECK!