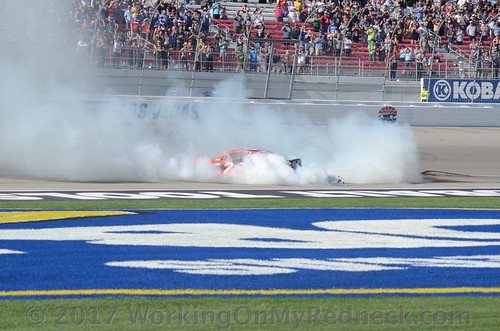 Las Vegas in 2017 was a city of celebration for Martin Truex Jr., who claimed his first of eight season wins at Las Vegas Motor Speedway.

With the Las Vegas win Truex also became the first driver to score a race trifecta by winning all three stages. He is the only NASCAR Cup Series driver to win all three stages in one race and he did it twice in 2017. Along with Las Vegas he also accomplished the feat at Kentucky Speedway.

After the completion of the 2017 season, Truex returned to the city of glitz to officially accept the NASCAR Cup Series Championship trophy at the annual awards banquet.

“No question we had some special moments in Las Vegas last year,” Truex said. “The victory was a confidence booster to our team. It not only took the pressure off for making the playoffs but it also showed that we had some strength at the mile-and-a-half tracks.

“But the win and everything that happened during Champion’s Week in Las Vegas was last year and we don’t dwell, focus or gloat on past accomplishments. Right now we are 100 percent committed to getting back to Victory Lane. The focus is as high as it has ever been.”

After overcoming adversity and posting a fifth-place finish at the 1.54-mile Atlanta Motor Speedway on Sunday, Truex’s No. 78 Bass Pro Shops/5-hour ENERGY Toyota will have another opportunity to attack a 1.5-miler in this Sunday’s Pennzoil 400 at Las Vegas Motor Speedway.

“The Las Vegas track has its unique features,” Truex explained. “What stands out to me is the way the bumps are and the frequency of the bumps. A windy Las Motor Speedway can also cause havoc with the balance of the car. But we had some good runs there in recent years – finishing second in 2015 and winning last year.”

Truex enters the Las Vegas race seventh in driver points, the same position he was in after last year’s second race.

“We are all working hard figuring out the new rules and it is evident the competition is fierce and if you let your guard down you’re going to be on the outside looking in.”

Las Vegas begins a three-race western swing for the NASCAR Cup Series. After Las Vegas the series heads to Phoenix and then to Fontana, Calif.

“The next three races have been good tracks for us and I am excited about that,” Truex said. “The way we bounced back in Atlanta was a big lift to our Furniture Row Racing team. We showed that we can come from the back of the field (started 35th) and run up front. That was encouraging.”