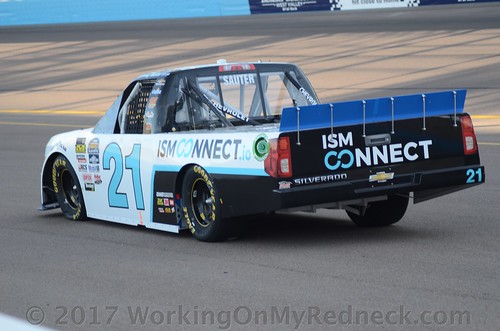 Stage One: Johnny Sauter finished Stage One in the seventh position after battling a tight condition for the first 40 laps. Under the caution, crew chief Joe Shear, Jr., called the No. 21 in for four tires, fuel, and an air pressure adjustment to provide more front grip and better rotation for the Allegiant Chevrolet.

Stage Two: Sauter gained five spots on pit road to begin the second stage from the second position, eventually taking the lead for the first time of the race on lap 51. He continued to suffer from a lack of frontgrip, but was able to complete Stage Two in the second position before pitting once again for four tires, fuel and an air pressure adjustment at the break. Quick work from the No. 21 pit crew earned Sauter the lead off pit road.

Final Stage: Sauter led for the first nine laps of the final stage before falling back to the second position. With lapped traffic slowing his advance to challenge for the lead, the No. 21 team hoped for a caution late in the race. With six laps to go, the yellow flag waved and Sauter came to pit road for four tires, restarting second in NASCAR Overtime. After being taken three-wide on the restart, Sauter fell back to the third position as he crossed the start-finish line.

Quote:
“I would love to be able to tell you I could do something different, but I just don’t think I could have. Wide open is wide open, and I ran those final laps wide open. I felt like we were in the right position and it just didn’t work out. My pit crew is phenomenal. Those guys are ultimately the ones that got us track position all night. I’m going to beat myself up for a week on this one, because I just don’t know what I could’ve done differently, so I’ll have to go back and watch to see if there is anything I missed. But, I feel good going into vegas where we had a fast truck last year, especially seeing how fast we were here.”