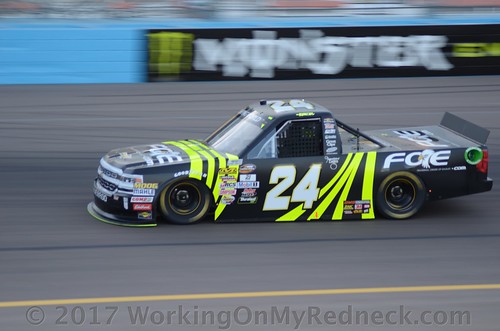 Stage One: Justin Haley started from the fifth position before reporting that he was fighting tight with no rear downforce. He fell back to the 14th position prior to telling the team he had a flat right rear on lap 32. Pitting under green, Haley lost two laps to the leaders, relegating him to a 25th-place Stage One finish. Coming to the green and white checkered flag, Haley stated there was still an issue with the Fraternal Order of Eagles Chevrolet. He pitted twice under the break, first for the team to diagnose and then repair a part failure.

Stage Two: An early caution, 14 laps into Stage Two, allowed Haley to return to pit road under yellow for four tires, fuel and a chassis adjustment to aid a loose-handling condition. Pitting under the caution allowed the team to stay on track at the conclusion of Stage Two to gain back a lap. Haley took the wave around to start the final stage in the 22nd position, now only one lap down to the leaders.

Final Stage: After pitting off-sequence from the leaders, the No. 24 team hoped for a caution in the first half of the final stage, as they could not make it to the end on fuel. With the race staying green, Haley came to pit road on lap 111 for right-side tires and fuel, losing another lap. When the final caution of the night occurred on lap 126, Haley stayed on track to earn a lap back, ultimately finishing 22nd in his first start at Atlanta Motor Speedway.

Additional Notes:
– Following a second-place result at Daytona International Speedway a week ago, Haley started off his Atlanta debut with a first and third-place showing in NCWTS practice sessions on Friday. He followed that up with a fifth-place qualifying effort, the highest of the four GMS trucks.

Quote:
“It was cool to show up to Atlanta and experience what all the hype was about. Having an abrasive track surface created amazing racing and really fast speeds. The Fraternal Order of Eagles Chevrolet was so fast in practice and qualifying, which made it all the more heartbreaking when we had our part failure on lap one. We say it all the time, how far our mile-and-a-half program has come, but now we’re showing everyone else the hard work GMS Fabrication puts into our chassis.”