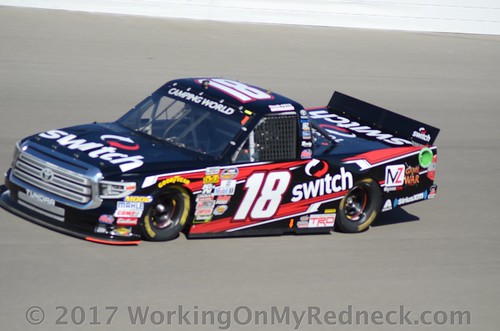 The soft open for the new NASCAR Camping World Truck Series spec engine has suddenly become a requirement, apparently, with every team working to obtain enough power plants to sustain a full fleet during the first couple of races this season.

When NASCAR first decided to introduce a spec engine option during the off-season, the understanding was that the sanctioning body would ease the engines into use so as not to alienate teams that wanted to retain manufacturer-supported engines. But after several tests, it appears that the Ilmor-produced NT1 is more competitive than the existing Original Equipment Manufacturer (OEMs).

After winning the Cup Series pole on Friday, Kyle Busch said that’s problematic because Ilmor doesn’t have enough inventory to meet the demand.

“We don’t have enough Ilmors,” Busch said. “They don’t have enough to ship out to go around. So yeah, that’s been awesome. We’re kind of shorthanded on some of that stuff. All of our backups, if we had to go to a backup truck, has all of our OEM stuff in it.

“We just don’t have enough engines right now. We were late to the game with ordering that stuff because we were trying to stick with the OEM.”

To his point, all but 11 trucks have been entered with Ilmor NT1s this weekend at Atlanta Motor Speedway. The KBM No. 18 (Noah Gragson) and Hattori Racing Enterprises No. 16 (Brett Moffitt) are the only Toyotas with actual Toyota engines.

Fourth-year driver/owner Jordan Anderson says he couldn’t have sold sponsors on a full-time schedule this season if not for the cheaper and more durable spec engine. He scored his first career top-10 last week at Daytona with the motor.

The Ilmors are expected to last 1,500 miles before a rebuild and could save teams hundreds of thousands of dollars in engine rebuilds or lease programs.