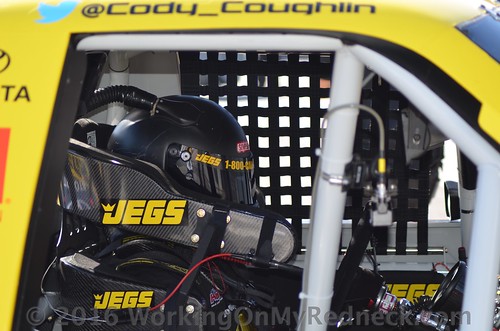 Stage One: Running as high as fourth, Coughlin finished Stage One in the 11th position. He reported that his JEGS.com Chevrolet Silverado was “loose on entry and tight center off” throughout the first 40 laps and came to the attention of his pit crew under the stage break. While on pit road Coughlin received four tires, fuel and round of adjustments, lining up ninth for the restart.

Stage Two: Running inside the top-10 during Stage Two, Coughlin relayed that his Chevy’s handing was still too tight on exit. As the run progressed, Coughlin suspected that his right front tire was giving up. Coughlin was able to stay on track despite the tire issue to finish Stage Two in 15th. He then pitted for four tires, fuel and another round of adjustments under the stage break, but an issue on the stop forced Crew Chief Jerry Baxter to call Coughlin down pit road a second time to top off on fuel, relegating him to 19th on the restart.

Final Stage: Working his way through traffic while running his fastest laps of the race, Coughlin made his way into the top-15 as the laps were winding down. However, with just over 10 laps remaining, Coughlin reported that his right front tire was giving him issues again. Despite trying to salvage his tire to the finish, Coughlin ultimately came to pit road under green, initially for two right side tires, with six laps remaining. While he was on pit road, the caution came out, and Baxter made the quick decision to change all four tires instead. However, after a pit road penalty, NASCAR ruled the No. 2 one lap down. With a green-white-checkered finish to end the race, Coughlin was scored with a 20th-place finish.

Quote:
“We had a fast JEGS.com Chevy at the beginning of the race, we just got progressively tighter as the race went on. Despite being tight, we had two separate tire issues that really ended our competitive night. The last one coming with only a few laps to go was just bad luck. The speed we showed though has me optimistic for when our luck does turn around.”