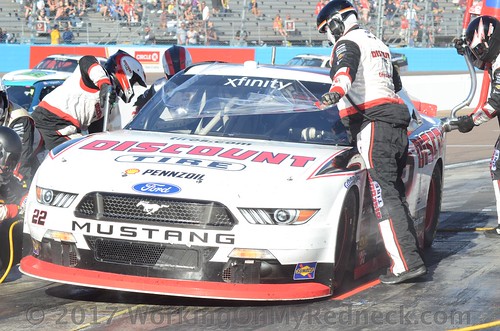 Quote:  “I think that’s a good way to start my season.  My season did not start in Daytona.  It’s a good way to start here.  I think today I learned a lot of respect for Cup guys who do this 500 miles on Sundays.  Holy cow.  They’ve got a lot more power and a little heavier than we are, so this gives me some good perspective, but I’m really grateful to be able to be behind the wheel of a Penske car and have Fitzgerald and Tommy Fitzgerald Sr. here on the box watching us and supporting me.  We’ll come to Fontana in the 60 car and learn a few things and try to get that program up to where it should be and we’ll go on to the next one. Just consistency and not overdriving your tires and just making sure you’re hitting your marks.  That’s what it came down to.  There were a few things left on the table, but I just wanted to finish and be there.”

Quote: “I don’t think we were even close.  Kevin played with us all day long.  He just kind of rode along out there and would run a few hard laps when he needed to and when he had enough distance then he’d chill back out, but Kevin is just really good at it.  It doesn’t matter what car he’s driving he’s just really good at Atlanta and apparently, we’re second-best to that.  It was a decent run for our Discount Tire Ford.  A second just always stings a little bit, but I don’t know where he’s faster than me.  He’s faster all the way around Atlanta is what I figured out today.  It’s not just one spot.  He’s able to go when he needs to and he’s just good at it – Cup cars, XFINITY cars – he’s just really fast.  Congrats to them.  They deserve it and we’ll just keep our heads down and working hard.”