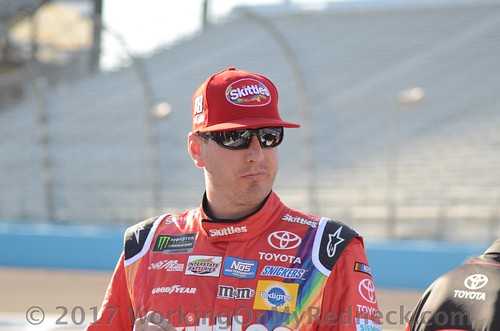 Ryan Newman was within seconds of breaking a pole drought that dates to 2013 – until Kyle Busch made his final-round qualifying run at Atlanta Motor Speedway.

Covering the 1.54-mile distance in 30.024 seconds (184.652 mph) in the money round of Friday’s knockout qualifying session, Busch edged Newman by .038 seconds to win his first pole of the young Monster Energy NASCAR Cup Series season, his first at Atlanta and the 28th of his career.

Starting up front is certainly a benefit on the abrasive asphalt at Atlanta, but Busch added a word of caution after his pole-winning performance in the No. 18 Joe Gibbs Racing Toyota. And he identified the driver he sees as a primary threat – Kevin Harvick, who has led 734 of 1,315 laps without winning in his last four races at AMS.

“We’ll work on it (Saturday) in race trim and see what we can do. But right now, qualifying on the pole today is a really good achievement for our team so far.”

Newman has seven poles at Atlanta and 51 total for his career, but the driver of the No. 31 Richard Childress Racing Chevrolet hasn’t started first on the grid since claiming the top spot for the fall race at New Hampshire in 2013.

Though disappointed at the continuing pole drought, Newman believes his car will race well on Sunday.

“Yeah, I think in race trim it’s pretty good,” he said. “I think there are always things that you can work on here. The track conditions seem to change so much when you start practice like that with a green race track.

“I look forward to the weekend. It’s one of the best race tracks we come to for being able to handle and work your magic inside the race car, because that’s what it all comes down to.”

Daytona 500 winner Austin Dillon was bumped out of the top 24 in the first round by Denny Hamlin’s last-ditch run and will start 25th on Sunday.

But Dillon had a better day than defending series champion Martin Truex Jr., whose No. 78 Toyota failed to pass the optical scanning station three times during pre-qualifying inspection. As a result, Truex’s car chief, Blake Harris was ejected from the track for the weekend, and Truex will lose 30 minutes of practice time on Saturday.

“We had body scan problems on the rear wheel openings, and we had rear toe failure as well,” said Scott Miller, NASCAR’s senior vice president of competition. “It was a combination of those three times through, and we just didn’t get a green light.”