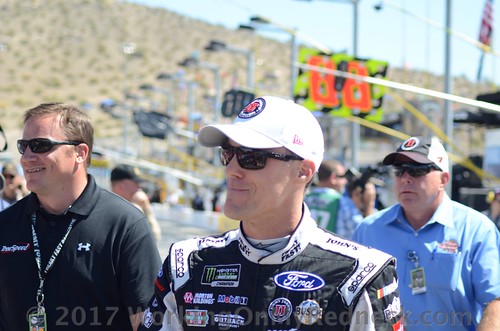 For so many longtime NASCAR fans, Kevin Harvick’s maiden win at Atlanta Motor Speedway in 2001 was memorable for the context he scored it in. It was only Harvick’s third start after suddenly being asked to drive Richard Childress Racing’s Chevrolet after Childress’ driver — the great seven-time champion Dale Earnhardt — perished on the final lap of the season-opening Daytona 500.

Harvick arrived in Atlanta full of emotion – a newlywed tasked to fill the sport’s biggest shoes at the time. And yet the Californian was able to focus and persevere en route to scoring one of the most popular victories in NASCAR history.

He’d like to take his new ride, the No. 4 Stewart-Haas Racing Ford, back to Victory Lane this Sunday at Atlanta for the first time since –  and judging by his recent showings at the 1.5-miler, he has to be considered a favorite.

Harvick has won a pole (2014) and led at least 100 laps in five of the last six Atlanta races. He’s been out front for 835 laps in that span. The next best lap leader, Joey Logano, led 165 laps in that timeframe. In 2017, Harvick led a dominating 292 laps at Atlanta, only to receive a late race pit road speeding penalty which left him ninth at the checkered flag.

“As a driver, you just love the challenge that comes with racing at Atlanta,’’ Harvick said. “This is always one that I circle on my calendar as a favorite and I look forward to racing in Atlanta this weekend.’’