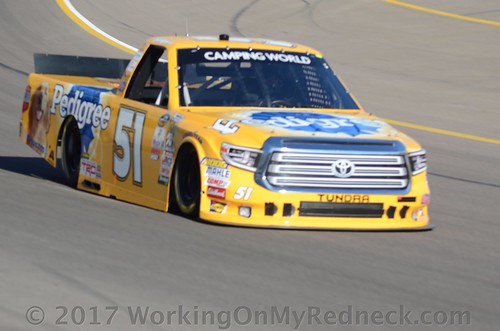 NASCAR Camping World Truck Series Overview
Event:                                    Active Pest Control 200, Race 2 of 23, 130 Laps – 40/40/50; 200.2 Miles
Location:                             Atlanta (Ga.) Motor Speedway (1.54-mile oval)
Date/Broadcast:            Feb. 24, 2018 at 4:30 p.m. ET on FOX Sports 1, MRN and Sirius/XM NASCAR 90
What You Need to Know
Spencer Davis, Driver Q&A
What did you think of your first NCWTS start at Daytona last weekend?
“I had a lot of fun in my first truck start. There at the end having Kyle (Busch) talking to my spotter Rick (Carelli) was a big help. Unfortunately, we didn’t get the storybook ending as we had throughout the race, but I’m really excited with a seventh-place finish.”
What did you learn testing at Charlotte Motor Speedway last month that can help you at Atlanta?
“It gave me some mile-and-a-half experience and learning how to work the track with the truck. It was helpful to get some confidence built up heading into Atlanta and Las Vegas, since those will be my first starts at both tracks. Being from Dawsonville, I consider Atlanta my home track and it would mean the world to me to win this race and have them sound the siren at the Dawsonville Pool room like they do for Chase and Bill (Elliott).”
Talk about having Rheem on your No. 51 Tundra this weekend at Atlanta:
“Rheem has been a long-time supporter of mine. They were actually my first sponsor when I started racing big cars. It’s going to be cool to have them on board again and I’m thankful for the opportunity. Hopefully it grows into more races because I’ve gotten some wins for them in the past and hopefully we can continue that too.”
Spencer Davis Career Highlights
Spencer Davis’ No. 51 Rheem Tundra:
KBM Notes of Interest
Kyle Busch Motorsports No. 51 Toyota Tundra 2018 NCWTS Box Score: