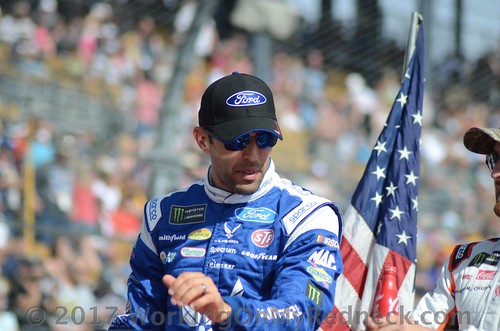 Aric Almirola did everything he possibly could to try to win Sunday’s Daytona 500, and he wasn’t about to condemn Austin Dillon for doing the exact same thing.

In a race that ended with a two-lap overtime shootout, Dillon claimed the Harley J. Earl trophy after tapping the bumper of Almirola’s No. 10 Stewart-Haas Racing Ford and turning him into the outside wall in Turn 3 of the final lap.

Almirola failed to complete the final circuit in his damaged car and was credited with an 11th-place finish. Dillon, meanwhile, was celebrating the most significant accomplishment of his young career in Victory Lane.

Was Almirola disappointed? Of course. But in a gracious post-race interview he opted not to direct any bitterness toward Dillon.

“It was the last lap and we’re all trying to win the Daytona 500,” said Almirola, who was making his first start for Stewart-Haas Racing. “It’s the biggest race of the year, and it’s a career-changing race, so we were just racing really aggressively. I used every move I knew to try and stay in the lead and, unfortunately, I just wasn’t able to hold on.

“He got to my back bumper and was pushing and just hooked me. My heart is broken, but the beauty is we’ll go to Atlanta, and we’ve got an incredible race team here at Stewart-Haas Racing, and we’ll have another shot next week.”

But did Almirola think Dillon was driving too aggressively?

“I wasn’t going to just stay on the bottom and let him rail the outside, so I blocked and he got to my bumper and pushed, and I thought I was still going to be OK, and somehow I got hooked. I still haven’t seen the replay, so I don’t know what happened, but I’m just devastated.

“I really thought we were going to start this relationship off with Stewart Haas Racing in Victory Lane.”