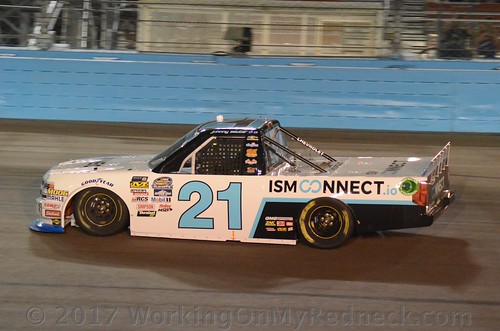 In a race that produced seven cautions for 35 laps and left 21 trucks running at the finish, Johnny Sauter held off Justin Haley by .098 seconds at Daytona International Speedway to win Friday night’s NextEra Energy Resources 250, the season-opener for the NASCAR Camping World Truck Series.

Sauter grabbed the lead from pole winner David Gilliland on Lap 92 of 100 and stayed out front the rest of the way. The victory was Sauter’s third at Daytona and 18th of his career.

The 2016 series champion dedicated the win to his crew chief Joe Shear, whose wife, Chandra Shear, passed away in December. The race performance of both driver and crew was impeccable.

“I felt like we executed flawlessly,” Sauter said. “I don’t even remember the pass for the lead. We had good track position and we lost it a couple times. I’m just so thankful to be driving this truck. This is best group of guys I’ve ever been around, and it’s great to start the season off like this.

“I just felt comfortable today and I don’t even know why. I didn’t have one nerve. I just felt like this was our day.”

As he watched Sauter close in on the victory, Shear was overcome with emotion.

“This is very, very, very special,” Shear said. “I don’t know if a lot of people know, but I lost my wife in December. She’s looking down on us. She was in love with racing just as much as I was.

“She was looking over us and helped us to this win. And I’m so grateful to be in the position that I’m at and have these people around me. This means so much. I’ll never forget this one.”

Haley had the lead for a restart on Lap 87 but surrendered it to Gilliland on Lap 91. One lap later, Sauter surged past Gilliland into the top spot. A lap after that, Gilliland slapped the outside wall on the approach to Turn 1 and brought his car to pit road, finishing 21st, four laps down.

“Those final laps were crazy,” Haley said. “I finally got shuffled back a little bit there on the last lap, and there wasn’t that much energy on the high side.”

Veteran Joe Nemechek came home third, followed by Ben Rhodes and Scott Lagasse Jr., who took the white flag in second place but couldn’t mount a charge against Sauter on the final lap.

John Hunter Nemechek wasn’t as fortunate. After leading for a restart on Lap 70, he picked up a tire rub trying to block a run from Ben Rhodes on the outside, and on Lap 73, his right rear tire exploded, ripping apart the entire wheel well and triggering a seven-truck accident that knocked Brett Moffitt, Stewart Friesen and Myatt Snider out of the race.

Note: Sauter used one of the fuel-injected spec engines available to series competitors this season and applauded NASCAR for making the lower-cost option available to Truck Series teams.

Check out the unofficial results of the NextEra Energy Resources 250 at Daytona.