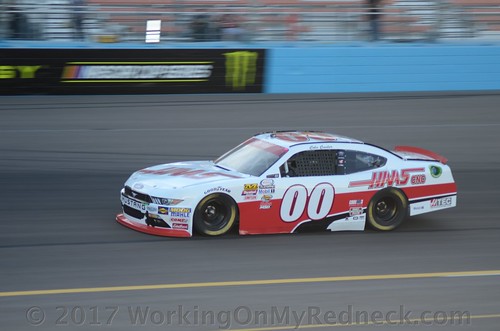 ● Custer piloted the Haas Automation Ford in and out of the top-10 throughout the stage.

● With two laps to go, Custer found a push from the rear sending him to the seventh position.

● Custer pitted for four tires, fuel and chassis adjustments at the conclusion of the stage.

● Custer battled inside the top-15 for the majority of Stage 2 while noting tight-handling conditions.

● At the conclusion of the stage, Custer pitted for four tires, fuel and adjustments.

● On lap 79, Custer powered the Haas Automation Ford Mustang to the ninth position.

● During the lap 83 caution, crew chief Jeff Meendering radioed Custer in for a fuel-only stop. He restarted in the ninth position.

● Custer was involved in an accident on lap 99 causing splitter damage on both sides.

● He pitted for damage repair five times during two caution periods and remained on the lead lap.

● After numerous cautions pushing the race 23 laps past the scheduled distance, Custer survived the late race chaos untouched and battled in and out of the top-10 before finishing 14th at the checkered flag.

● Custer is 12th in the Xfinity Series Playoff points standings.

● The race went 23 laps past the scheduled 120-lap distance.

● Tyler Reddick won the Powershares QQQ 300 to score his second career Xfinity Series victory, first of the season and first at Daytona. His margin of victory over second-place Elliot Sadler was .001 seconds.

“I have to give a huge thanks to the Haas Automation crew for keeping us alive in this race. We were caught up in an accident early and were able to salvage a decent finish. It was still really drivable there at the end. I was really surprised, but I had a huge vibration, so we didn’t have the fastest car there. I was happy with it. Compared to last year, this is a lot better. We didn’t put ourselves in a hole, so I’m looking forward to Atlanta.”

The next event on the NASCAR Xfinity Series schedule is the Atlanta 250 on Saturday, Feb. 24 at Atlanta Motor Speedway. The race starts at 2 p.m. EST with live coverage provided by FS1.