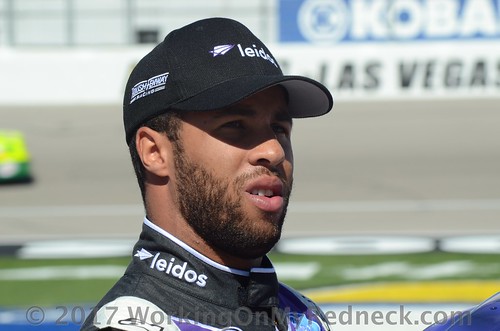 On Sunday, Darrell “Bubba” Wallace Jr. will make his first start in the Daytona 500—as the first African-American driver to compete in the Great American Race since Wendell Scott drove his No. 34 Ford to a 29th-place finish in 1969.

Fans can follow Wallace’s journey to the Monster Energy NASCAR Cup Series on Facebook Watch, which is featuring an original series titled: “Behind the Wall: Bubba Wallace.”

The first episode of the eight-part series, produced by NASCAR Productions, will post on Thursday, Feb. 15. The episodes follow Wallace’s progress from his early days in racing to his first event as the full-time driver of the No. 43 Richard Petty Motorsports Chevrolet.

The attention at times has been overwhelming.

“NASCAR came to me with an idea of a new way to try to broaden the horizon, and I’m like, ‘Yeah, let’s do it,’” Wallace told the NASCAR Wire Service. “It’s been stressful for sure. Cameras following you, around you all the time, capturing everything…

“The only time they haven’t followed me is when I go in the bathroom–that’s about it–and go to sleep. Everything else in between, they’re there to capture it. It’ll be a fun series to watch, for sure.”

With the Daytona 500 imminent, Wallace has tried to curtail some of the hoopla surrounding him.

“We went into it knowing that, once race season is here and we got down to Daytona, we kind of laid the line down of ‘OK, I’m not doing anything extra to spice up the show; if we don’t have what we have, then so be it.’

“I’m not a TV star. I’m here to race cars. We’re capturing a little bit of content while we’re down here, which is going to turn out really good. I’ve already seen a couple of first episodes, so I’m really excited about it.”