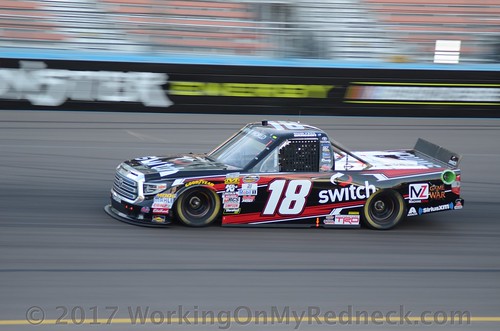 Have you set any goals for the 2018 season?
“I’ve set a couple goals for 2018. I’m going to be working with Rudy Fugle and his team — that’s a great opportunity for me as a young driver knowing all the success they’ve had in the past years. I set a goal of six races to win — it might be less, it might be more, but I’m hoping on the more side. I have to do the best that I can do and then hopefully those wins will come. I also want to complete all the laps and with completing all the laps and hopefully getting those wins the championship will come too.”
How important is it to get off to a strong start this year?
“Getting off to a strong start is everything — I learned that last year. Wrecking on lap one at Daytona, and then spinning out on lap one at Atlanta — those are the first two races of the year and it really took a downhill turn for my confidence. Having the momentum from the end of last year — hopefully, we can fire off as good as we ended last year. I’m just trying to finish all the laps, make it to the end of these races and be in contention. It’s all about consistency at the end of these races — being up front and being a contender for the win.”
Do you have a strategy for Daytona with the stage racing?
“I’m going to go back and watch last year’s race before I head down there this year to kind of get a better idea of what’s going to happen at the end of these stages — it’s going to be pretty wild. You’re going to have to be pretty aggressive to stay up front and get the stage points, but you’re also going to have to be smart because anything can happen at Daytona. We’re racing so close, inches off each other — it’s going to be tough to stay out of trouble there. You have to make it to the end and be aggressive the last couple laps and hopefully end up in victory lane.”
Noah Gragson Career Highlights
Noah Gragson’s No. 18 Safelite AutoGlass Tundra:
KBM-013: The No. 18 Safelite AutoGlass team will unload KBM-013, for Friday’s NextEra Energy 250 at Daytona (Fla.) International Speedway. It is the same Tundra that Kyle Busch led 25 laps with en route to victory in the 2014 season-opening event at Daytona and Christopher Bell finished seventh within last year’s race at the 2.5-mile superspeedway.
KBM Notes of Interest