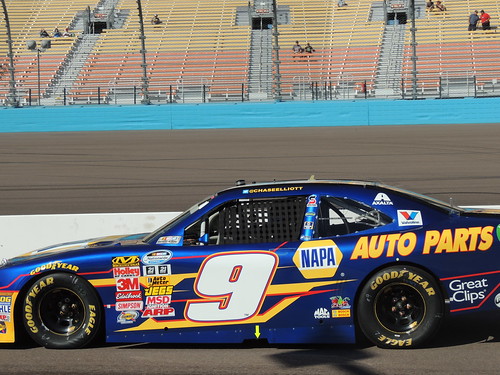 NAPA AUTO PARTS has grown its relationship with 12-time NASCAR Cup Series champions Hendrick Motorsports with a new agreement that immediately expands its majority sponsorship of driver Chase Elliott and the No. 9 Chevrolet Camaro ZL1 team in 2018 and extends its support for another two years through the 2020 racing season.

The new agreement increases NAPA’s majority sponsorship of Elliott from 24 to 26 races annually beginning in 2018 and throughout the 2019-2020 extension. It guarantees primary sponsorship of the No. 9 team in the prestigious Daytona 500 each year and continues associate-level sponsorship in all non-primary events.

“NAPA is proud to expand our partnership with Hendrick Motorsports and Chase Elliott, which serves as a key component of our marketing efforts,” said Gaylord Spencer, senior vice president, marketing, for NAPA AUTO PARTS. “This relationship began with a storybook season in 2014 and has seen Chase grow into a top contender in the NASCAR Cup Series. The future looks bright, and we are excited to be a part of it for years to come.”

Atlanta-based NAPA AUTO PARTS began its relationship with Elliott as primary sponsor during the driver’s historic 2014 Xfinity Series season when he became NASCAR’s youngest-ever national series champion while earning rookie of the year and most popular driver honors. Its support continued through another full Xfinity season (2015), Elliott’s five-race Cup Series debut (2015) and as majority sponsor of his first two years at the Cup level (2016 and 2017).

“The relationship with NAPA has been a major part of my career starting in 2014,” Elliott said. “Their support has been huge for me, and I’m very thankful for what they’ve done for our whole team at Hendrick Motorsports. They’re a committed partner, and it’s been a pleasure meeting the people involved with their business all over the country. I’m proud to represent all of those folks and look forward to having them part of our No. 9 team for many more years.”

Elliott earned 2016 Cup Series rookie of the year honors and is coming off his second playoff appearance in as many full seasons at NASCAR’s top level. In addition to his 2014 Xfinity Series title, the 22-year-old Dawsonville, Georgia, native has already posted seven wins and 107 top-10 finishes in NASCAR national series competition.

“NAPA made an incredible commitment early on in Chase’s career, and that has only grown over the years,” said Rick Hendrick, owner of Hendrick Motorsports. “They’re passionate about our sport, but the real key is that racing works for their employees, their customers and their overall business. The No. 9 team and all of us at Hendrick Motorsports are dedicated to NAPA’s success, and we look forward to working together and continuing to deliver in every aspect of our program.”