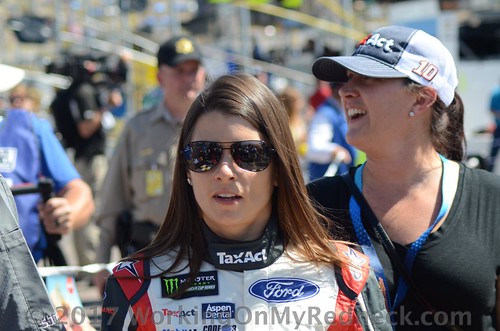 Danica Patrick’s arrangement to finish her racing career at the Indianapolis Motor Speedway in the  102nd Indianapolis 500 presented by PennGrade Motor Oil this May is complete, she told IndyCar.com on Sunday.

Patrick, 35, revealed in November that she is retiring from full-time racing after competing for seven Verizon IndyCar Series seasons – winning her only race in 2008 – and the past five full seasons for Stewart-Haas Racing in NASCAR’s top series. In that emotional press conference at Homestead-Miami Speedway three months ago, Patrick outlined a plan to race in the marquee events for both NASCAR and INDYCAR, dubbing her participation in the Daytona 500 and Indianapolis 500 the “Danica Double.”

A public announcement of which team will field her entry in “The Greatest Spectacle in Racing” in May is not imminent, she said.

“No, I just needed to make sure it (the deal) was done,” she said. “The rest I don’t really care about.”

Patrick became a national media force in 2005 when she started and finished fourth as an Indy 500 rookie – at the time a record for a woman driver – for Rahal Letterman Racing, leading 19 laps – another first. She finished third in 2009 but has not competed in the Indy 500 since 2011.

Although Patrick’s “Double” venture has been aided by a reunion with long-time sponsor GoDaddy, her business team did not secure and announce until January a Daytona 500 ride. Unable to land with a top-tier team, she qualified 28th-fastest on Sunday for Premium Motorsports, which has one top-five and five top-10s in 1,015 starts in NASCAR’s top three series combined.

The announcement for her Indianapolis 500 ride will, she said, “be a bit of a bigger deal.”

“Obviously, the start of this (NASCAR) season didn’t happen any different than last season did, where I showed up and I hadn’t been in the car since Homestead (the 2017 season finale). It’s no different than that,” she said.

“But Indy is obviously totally different. We’ll do something a little more substantial for the announcement and the unveil.”

Patrick doesn’t hesitate when considering which of her final two races she would rather win.

“Yeah, it would be Indy,” she said. “There’s nothing against Daytona, but just from being a young little girl, I had always wanted to win the Indy 500. It’s not to say that Daytona is not an enormous deal.

“But I have to go with what feels like the most important in my heart and I came from open-wheel racing, I wanted to win the Indy 500 from being a go-kart driver when I was a kid and came close a few times. It’s kind of what started it all for me, so there’s just a lot more history there.”