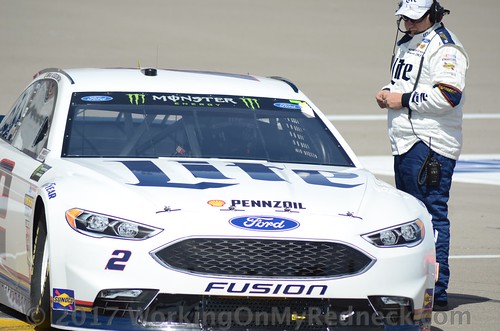 What fans saw in Sunday’s Advance Auto Parts Clash at Daytona International Speedway should constitute a promising look ahead to the Daytona 500 a week later.

Thanks to NASCAR’s elimination of the ride-height rules on superspeedways, the cars in the Clash were low-slung and dicey to control, with the rear spoilers much lower than in previous years. Closing rates were magnified, as runs developed quickly with enormous momentum.

“Yeah, I just think the runs happen quicker,” said Joey Logano, who finished second to Team Penske teammate Brad Keselowski. “It’s kind of like in the Xfinity race. In the Xfinity races, the cars get these huge runs, and they’re hard to stop. This is maybe not quite to that extent, but the runs you can build are way bigger than they used to be.

“But that bubble, that imaginary bubble in between the cars that we always talk about, seems to be stopping us just as hard. So we get a bigger run, but it kind of stops us just as much.”

But with runs developing more quickly, they will also be more difficult to block in next Sunday’s Daytona 500, making it harder to hold a lead in the Monster Energy NASCAR Cup Series opener.

On the other hand, drivers who had the misfortune to pull out of line without help were shuffled quickly to the back of the pack, in imminent of losing the draft.

That’s what happened to Kevin Harvick, who was dropped from the lead pack and finished ninth, 28.247 seconds behind race winner Keselowski.

“I just got myself in a couple bad spots by making moves and trying to do some things I didn’t need to be doing in a single-file race,” Harvick said. “It’s one of those things where I got myself in a bad spot, got up toward the front and then got shuffled back.

“I got to the back and tried to start playing around with things to try and make some progress. I went to pull up on the next-to-last car, and I slowed down so much that I lost the draft. I just made a mistake.”