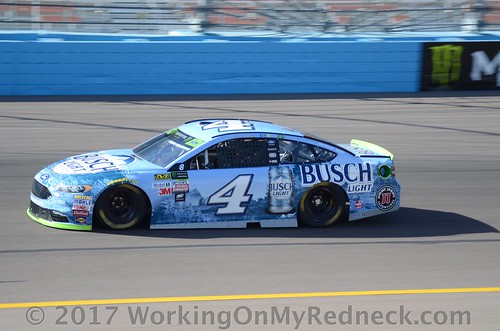 ●  Kevin Harvick started ninth, but dropped to 12th in the opening laps.

●  The race ran under the green flag until the mandatory caution on lap 25.

●  The No. 4 Busch Beer Ford Fusion stayed out and finished first in the first segment.

●  Harvick pitted on lap 26 and began the final segment in 11th.

●  Harvick raced in ninth when the race’s only unplanned caution fell at lap 33 for Jamie McMurray’s accident.

●  Harvick fell out of the draft on lap 45 dropping from fifth to 15th.

●  Harvick never returned to the front of the field and finished ninth after avoiding a last-lap wreck.

Kevin Harvick, Driver of the No. 4 Busch Beer Ford Fusion for Stewart-Haas Racing:

What did you learn today? “I just got myself in a couple bad spots by making moves and trying to do some things I didn’t need to be doing in a single-file race. It’s one of those things where I got myself in a bad spot, got up toward the front and then got shuffled back. I got to the back and tried to start playing around with things to try and make some progress. I went to pull up on the next to last car and I slowed down so much that I lost the draft. I just made a mistake.”