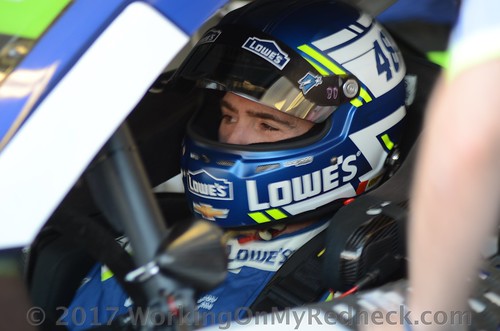 At least Jimmie Johnson is getting closer.

On Sunday at Daytona International Speedway, Johnson made it to the last lap of the Advance Auto Parts Clash. He just didn’t make it to the checkered flag.

After contact from Kyle Larson’s No. 42 Chevrolet turned Johnson’s No. 48 into the outside backstretch wall, the seven-time champion failed to finish the exhibition race—for the seventh straight year. Johnson was credited with completing 74 of 75 laps in a 12th-place finish, but a DNF (did not finish) is a DNF.

“I had some contact from behind and we got turned into the outside wall,” Johnson said. “I haven’t had a chance to look at it and see what exactly happened, but the nose on our Chevy is pretty pointy. I was pushed by a Chevy, so I don’t know if that had something to do with it or not. I just need to get a good look at the replay.”

Johnson was running fourth at the time of the crash, having just lost the third spot to Kurt Busch. With a strong car for the bulk of the race, the Hendrick Motorsports driver enjoyed driving the new Camaro ZL1 race car under new NASCAR rules that lowered the bodies of the cars as close as possible to the asphalt.

The wreck was another matter.

“Yeah, I guess we’re the first real crash at speed with that (configuration),” Johnson said. “I kind of forgot about it once we got going. I think the cars look cool, and they’re going faster, which is more fun from our standpoint. It makes handling a little more of a premium.”