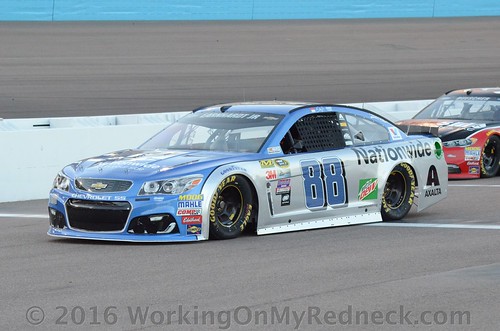 Junior Nation, you have a new standard bearer!

Alex Bowman, the successor to Dale Earnhardt Jr. in the No. 88 Hendrick Motorsports Chevrolet Camaro ZL1, couldn’t have had a more auspicious start to the next phase of his Monster Energy NASCAR Cup Series career—namely, winning the pole position for next Sunday’s season-opening Daytona 500.

But this time, young driver Alex Bowman is piloting the car.

“It was a little nerve-wracking,” said Bowman, who won his second career pole in his last three Monster Energy starts, dating back to November 2016 at Phoenix, where he was subbing for an injured Earnhardt. “Our Nationwide Camaro ZL1 has been great since we unloaded.

“All the guys back at the chassis shop, body shop, and the Hendrick engine shop have been top-notch. They’ve all worked so hard. And we knew we were going for the pole. That’s what we’re here to do.”

“I think it’s still a little surreal,” Bowman said. “It’s a dream come true to get to drive for Hendrick Motorsports. I never thought it would have happened after the path my career took. I’m so thankful to be able to do this. I’m very blessed to be able to call driving a race car my job, and now to get to drive what I think is the best race car in the business.”

Denny Hamlin will line up alongside Bowman after notching a speed of 195.092 mph in his No. 11 Joe Gibbs Racing Toyota to nab the second starting spot for the “Great American Race.” Hamlin is the 2016 Daytona 500 winner, but has never started on the front row for the sport’s biggest race.

Bowman and Hamlin also were fastest in the opening round of qualifying.

Sunday’s two-round, single-car qualifying session only produced the front row for the season-opening Daytona 500 on Feb. 18 (2:30 p.m. ET, FOX, MRN, SiriusXM NASCAR Radio). The rest of the field will be determined by Thursday’s Can-Am Duels (7 p.m., FS1, MRN, SiriusXM NASCAR Radio). The lineup for the Duels will be set based on Sunday’s qualifying speeds.

Jimmie Johnson, Kyle Busch, and William Byron all showed speed during qualifying, posting the third, fourth and fifth-fastest speeds (respectively) in Sunday’s session. But their Daytona 500 grid positions, along with the rest of the field aside from the front row, will be set based on the Duels.

Check out the qualifying speeds for the Daytona 500.