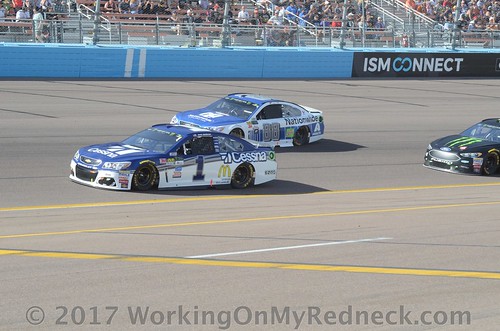 When is “worse” actually “better?”

When a driver talks about the way his race car handles.

“Worse” in racer parlance means tougher to drive, and to the elite drivers in the Monster Energy NASCAR Cup Series, that’s a good thing. The stars of the sport would rather see races decided by the person behind the wheel, rather than the power under the hood.

Traditionally, Daytona International Speedway has been a handling track, but a repave in 2010 tipped the scale toward horsepower at the expense of chassis setup. Defending Daytona 500 champion Kurt Busch thinks the equation may change as a result of NASCAR’s elimination of the post-race ride-height requirement.

In other words, cars at the superspeedways of Daytona and Talladega no longer will have to meet a minimum height in post-race inspection, bringing those speedways in line with all other Cup tracks, where a ride-height rule was not in effect last year.

“The way the cars will be pinned to the ground, it’s the first time really that we’re looking at moving around nose weight and the balance of the car to adjust the handling,” Busch told the NASCAR Wire Service. “We haven’t done that really here in Daytona for eight years. They repaved it in (2010), so since then, it has been no handling issues whatsoever.

“I’m really excited about this time around to hopefully see what the tire wear shows and how the balance of the car will shake out with the ride height rule.”

Goodyear is bringing the same tire combination the Monster Energy NASCAR Cup Series ran at Daytona last July, and the tire maker doesn’t expect any issues with the low-slung cars. But that doesn’t mean Goodyear reps won’t be looking with watchful eyes when cars come off the track.

Alex Bowman tested the 2018 package last year. On Feb. 18, he’ll compete in the Daytona 500 for the second time—and the first time as the successor to Dale Earnhardt Jr. in the No. 88 Hendrick Motorsports Chevrolet.

During the test, Bowman noticed a difference in the way the car drove, but he conceded that other teams might achieve different results with varying approaches to their chassis setups.

“I thought it made the cars drive worse,” Bowman said. “I was looser on entry, but it was kind of split. Obviously, not everybody tackled it the same way, and not everybody had the same setup in their cars. I think there were only six or seven cars here.

And it will be interesting to see if “worse” is indeed “better” when it comes to the action on the track in the Great American Race.