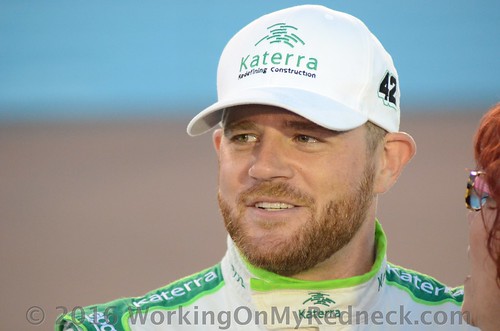 Justin Marks is preparing to make his Daytona 500 debut on Feb. 18 and as far as first-timers go, there may be no driver more prepared for this great step in his career.

It is one of many great steps – figuratively and literally – Marks has made…and will make. This year, he’ll take the green flag for the Daytona 500. Next year, he hopes to plant a flag near the summit of Mount Everest.

The 36-year-old may well be NASCAR’s version of “The Most Interesting Man in the World.”

“That’s insane to me,’’ NASCAR driver Kyle Larson said of his good friend Marks’ pursuit of the world’s tallest mountain. “We fly airplanes at 35,000 feet in the air and that Everest peak is what, 29,000 feet.

“It’s really fascinating and neat to know someone who’s going to attempt to climb Mount Everest one day.

“Maybe when you get more involved in the mountain climbing you don’t think it’s as crazy as it is.  But from the outside looking in…I mean there’s no roll cage up there.”

Only a month ago, Marks was climbing Aconcagua in the Andes Mountains – reaching 21,900 feet, just a few hundred feet short of a stormy summit, unsafe to venture in those conditions. And that experience was literally days before arriving in Daytona Beach to race an Acura in the Rolex 24 At Daytona.

“It’s been kind of crazy,’’ Marks conceded with a slight laugh. “I was preseason testing at the Roar [Before the 24] the first week of January. I drove the first session on Friday, the first time I’d been in that IMSA car, then got out of the race car and went straight to my rental car and drove to the Orlando Airport. Then I flew 18 hours to Mendoza, Argentina, then drove three hours up into Provincial Park and took a helicopter to base camp.

“So I was in base camp like 24 hours after driving the [Acura] NSX at Daytona. So been kinda crazy.’’

And the frenetic pace only continues for Marks, who will drive the No. 51 Chevrolet Camaro for Rick Ware Racing in conjunction with Premium Motorsports in the Daytona 500. The team – which is also fielding a car for Danica Patrick – has a guaranteed starting spot as Rick Ware Racing has leased a charter.

“Obviously it’s a dream, a bucket list thing,’’ Marks said. “I’ve been racing for 20 years and I’m kinda like at the point where I want to do these amazing races that are the flagship events in the sport I love.

“I tried to make a race a few years ago and missed it. I’ve tried to get back ever since and it’s the Daytona 500. It’s the biggest event in our sport.

“I remember I went there as a kid, I watched on TV, I remember ditching school in eighth grade to go watch the Gatorade Duels. So being a part of it is a huge deal. I’m in a good car with a good group of people and we’ll be well prepared for the event.

“So I’m just going to do the best job that I can but also just try to soak up as much of the experience as possible because I’m doing it because I love our sport and it’s a tremendous event in our sport, a bucket list item for me.’’

And while Marks said he still hopes to compete in several NASCAR events in 2018, he will be competing full-time in IMSA driving the No. 93 Acura NSX GT3 for Michael Shank Racing. For the driver who currently calls northern California home, it will be the first full season of racing since 2010 when he competed in the ARCA Series, winning at Palm Beach, Fla. and earning a pole position and 13 top-10 finishes in 20 races.

Racing for Marks has been a diverse and very personal pursuit – as you may expect from someone who has shown us all how great the rewards are when you dare to dream big.

“He’s had very successful businesses that way and his racing endeavors have been successful as well,’’ his friend Larson explained. “He’s kind of had some things he dreams about and wants to do. And does them.

“After he won the Xfinity race at Mid-Ohio we were talking and he was like, ‘I’ve always dreamed of climbing Mount Everest some day and I’m going to go train for it.’

“It’s really cool someone can be involved in that many different things and then go out and do it. He’s definitely a role model to a lot of people.’’

Marks concedes that he’s always been a “think big” type of person. The first triathlon he entered was an Ironman. The first running race he competed in wasn’t a local 10K, it was an ultra-marathon.

“I just think for me, I’ve never been very good at doing anything in mediocrity at all,’’ Marks said. “Anything I’ve ever wanted to do or had any desire to do, I always envision doing it as aggressively as possible, pushing it as far as possible.”

So, of course, Mount Everest is a logical goal for Marks. He has been training, in a sense, for years and upped the focus and physical challenge in the last year as he begins a true push to summit the world’s tallest mountain.

The mindset necessary to accomplish this is interesting, compelling and crucial. It is what separates those of us who might dream of climbing Everest and those, like Marks, who actually plan to do it.

“It’s hard to go through the daily routine of life – cooking food, packing, moving camp and inventorying, of rationing clean clothes and trying to keep everything dry, just everything else besides the climbing – that’s all hard work too.

“It’s an incredible challenge keeping your stuff organized, keeping yourself motivated mentally and then compartmentalizing any kind of uncomfortableness or fear you have. It’s unlike anything I’ve ever done.’’

Marks says the preparation for racing – even in IMSA’s grueling endurance races such as the Rolex 24 or 12 Hours of Sebring – benefits from his Everest training.

“My training program has basically been 100 percent focused on climbing knowing that, as a caveat, the fitness I build will help me in a race car,’’ Marks said. “For example, last year, I went down to Ecuador to climb volcanoes. I was training for that for about four months and my training was peaking at the time I drove the 12 Hours of Sebring. I felt better in the race car in that race than I almost have ever felt in my life. So I knew the training I was doing for mountains carried over to the car.”

So last month Marks was heading toward a mountain summit. In the next week, he will push toward a racing goal – competing in NASCAR’s biggest event, the Daytona 500. Mount Everest, he’s coming your way next year.

“I think a lot of people are into it, a lot are living kind of vicariously through it because it’s adventure,’’ Marks acknowledged of the interest in his climbing.

“I think everybody kind of has it in them, everybody has a desire to do something, especially in the racing community which is such a unique life for all of us anyway.

“A lot of people ‘get it.’ They’re enthralled by it because they’re all kind of adventurous people. But a lot more people follow it than I thought would, so that’s made it important to me to share as much as I can on social media as possible.

“I’m lucky because I have a tremendously understanding wife that lets me go and do this stuff, which is a big part of it. Everybody thinks it’s really cool.”

It is a strong lesson in what seizing the day can mean – and that’s an idea that any of us can appreciate and learn from.

“I will tell you, setting these big, audacious goals and then training for them and pushing yourself outside your comfort zone like that, it really changes your perspective on a lot of things in life,’’ Marks said. “I mean, when you go through an experience like that [climbing a mountain], it makes a lot more in life appear attainable.

“You look at things and say, ‘that’s a dream’ or ‘that’s a goal’ or ‘I’d love to do that someday.’ For me, personally, going through the process of mountain climbing, I look at all those things not as dreams, goals or “some days” but just as something I can go work for.

“It’s just work – making the decision rather than dreaming about it or hanging a picture on the wall. It’s just a matter of thinking about it methodically, of saying I want to go do that so I’ll figure out what the process is.

“You stop thinking about it, and just do it. ‘’