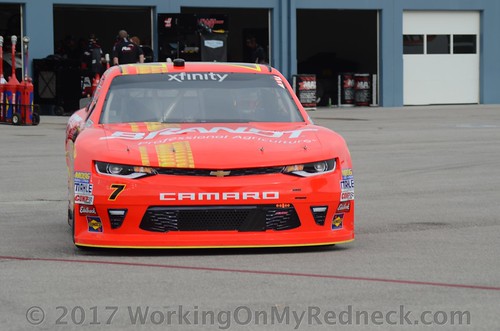 JR Motorsports announced today that Rinnai Corporation, manufacturer of the No. 1-selling brand of tankless water heaters in North America, will serve as primary sponsor of Justin Allgaier and the No. 7 Chevrolet for the upcoming Rinnai 250 NASCAR Xfinity Series race at Atlanta Motor Speedway on Saturday, Feb. 24.

Rinnai has been a long-time partner in the sport, spanning more than a decade, and increased its involvement last year, signing on as a multi-year sponsor of the Atlanta Motor Speedway NXS race.

“Rinnai is excited about the opportunity to sponsor Justin Allgaier and the No. 7 Chevrolet during the Rinnai 250,” said Frank Windsor, COO of Rinnai America Corporation. “With the launch of Rinnai’s portfolio of new products, sponsoring Justin during our namesake race is a good way to bring our brand in front of NASCAR fans. We wish Justin and his team all the best during the race.”

Headquartered in Peachtree City, Georgia, Rinnai America Corporation is a subsidiary of Rinnai Corporation, based out of Nagoyoa, Japan. In addition to water heaters, Rinnai also manufactures gas appliances, including a wide range of kitchen equipment and heating and air-conditioning units. Rinnai recently announced plans to build its first North American manufacturing facility in Griffin, Georgia. The company intends to start its manufacturing and assembly operations in an existing factory in Griffin in April 2018 and then move these operations to a new facility that Rinnai will construct.

“Rinnai is a top-notch company with quality products and I’m pumped to have them on board with us in their home state of Georgia,” said Allgaier. “I know they are also the race sponsor and they’ll have a lot of customers and employees there so we’re going to make sure they have a great experience. How cool would it be to get this Rinnai Chevrolet in Victory Lane at the end of the day?”

Allgaier is in his third year with JRM and is coming off the first multi-win season of his NXS career. In 240 series starts, he has five wins, 52 top fives and 128 top 10s. The 31-year-old driver has been competitive at Atlanta Motor Speedway, leading 30 laps and finishing in the top 10 three times in seven NXS starts.

ABOUT RINNAI:
Rinnai America Corporation, a subsidiary of Rinnai Corporation in Nagoya, Japan, was established in 1974 and is headquartered in Peachtree City, Georgia. Rinnai Corporation manufactures gas appliances including tankless water heaters, a wide range of kitchen appliances and heating and air conditioning units. As the technology leader in its industry, Rinnai is the largest gas appliance manufacturer in Japan and is the number-one selling brand of tankless gas water heaters in North America. Annual corporate revenues, including those of its subsidiaries, are in excess of $3.1 billion. With a global perspective to create 21st century products for the home and business, Rinnai Corporation commits itself to safety and the pursuit of comfortable lifestyles. For more information about Rinnai’s entire product line, visit rinnai.us.