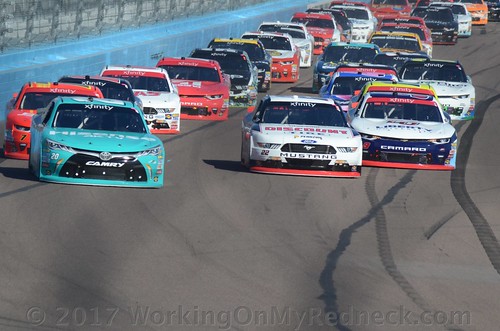 NASCAR today announced the 2018 stage lengths for its three national series, looking to build on last season’s successful debut of the race format.

In the Monster Energy NASCAR Cup Series, all 2018 stage lengths will remain consistent with 2017. The race and stage lengths for the Charlotte Motor Speedway road course race in the Playoffs will be announced at a later date.

In the NASCAR Camping World Truck Series, both Las Vegas Motor Speedway races are scheduled for 134 laps, with stage lengths set to end at Lap 40, Lap 80 and Lap 134.

“Our primary goal every season is providing the best race for our fans, and to that end, we will remain consistent in terms of stage lengths for the majority of our national series events,” said Scott Miller, NASCAR senior vice president of competition. “Last year’s debut of the race format was a strong one, and we look forward to building on that foundation in 2018, starting with Speedweeks at Daytona.”

For the full list of stages for the remainder of the Monster Energy NASCAR Cup Series season, as well as the NASCAR Xfinity Series and NASCAR Camping World Truck Series seasons, see pages 2-4.