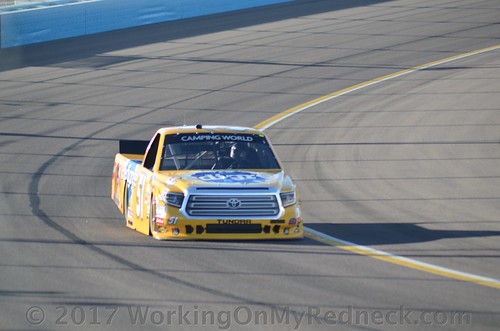 Gilliland, the 2016 and 2017 NASCAR K&N Pro Series West champion, will drive the No. 4 PEDIGREE® Tundra at Dover (Del.) International Speedway, May 4, Charlotte (N.C.) Motor Speedway, May 18, Talladega (Ala.) Superspeedway, Oct. 13and ISM Raceway (formerly Phoenix Raceway), Nov. 9. BANFIELD® Pet Hospital will also sponsor the rookie of the year contender at Gateway Motorsports Park in Madison, Ill., June 23 and Bristol (Tenn.) Motor Speedway, Aug. 15. The 17-year-old registered an average finish of 5.0 across his final three races of his six-race Truck Series schedule in 2017, including a career-best third-place finish at New Hampshire Motor Speedway in Loudon on Sept. 23 in the PEDIGREE® Tundra.

David Gilliland boasts 332 career starts in the Monster Energy NASCAR Cup Series, 56 in the NASCAR Xfinity Series and 10 in the Truck Series. His lone National Series win came in the 2006 Xfinity Series event at Kentucky Speedway in Sparta. He’s captured two poles in the Cup Series at Daytona, pacing the field to the green in both the 2007 Daytona 500 and the 2014 July event, and finished third in the 2011 running of the “Great American Race.” He recorded a sixth-place finish in his lone Truck Series start at the 2.5-mile superspeedway in 2015. The PEDIGREE® Brand will sponsor him at the two restrictor-plate races, Daytona and Talladega.

“It’s great PEDIGREE® and BANFIELD® Pet Hospital are returning to KBM again this season,” said team owner, Kyle Busch. “I have built a long relationship with them as a sponsor on my Monster Energy Cup Series Toyota and now they are expanding that to support another young talent, Todd Gilliland. I’m confident Todd can get them to Victory Lane this year.”

“I’m so pleased PEDIGREE®returned to sponsor me again this season,” said Todd Gilliland. “They were with me for six races last year and with every race I felt like we got another step closer to getting them to Victory Lane. They have a history with our family since PEDIGREE® sponsored my Dad (David Gilliland) in 2006. It’s pretty cool now they will be on both of our Tundras and will continue to be a part of our family.”

“It’s pretty exceptional when a company which sponsored me back in 2006 comes back to do it again 12 years later,” David Gilliland said. “Having PEDIGREE® and BANFIELD® Pet Hospital not only sponsor me, but my son (Todd) as well is amazing and we are very grateful for the opportunity. I’ll be keeping Todd’s seat warm for him in the No. 4 at Daytona, but Talladega will be a different story when I get to race against him. I may not have taught him all my driving secrets yet.”

“The PEDIGREE® brand is proud to sponsor Todd Gilliland, as he competes for a chance at Victory Lane” said Elizabeth Barrett, PEDIGREE® Brand Manager. “This new sponsorship is a great extension of our long-standing relationship with Kyle Busch Motorsports and we think Todd will continue to connect the NASCAR community’s engaged audience with the PEDIGREE® brand.”

KBM prepares a fleet of race-winning Toyotas out of its state-of-the art 77,000-square-foot facility in Mooresville, N.C. Fans can stay up-to-date with all the latest KBM news online at www.KyleBuschMotorsports.com, by liking the team on Facebook

About the PEDIGREE®® Brand

The PEDIGREE® Brand is the number one brand of dog food and treats in the world, feeding more dogs than any other brand.  The PEDIGREE® Brand offers a wide variety of products and formats for dogs at every life stage. The PEDIGREE®Brand is built on an unwavering love for all dogs and a commitment to dog adoption. For more information, please visit www.pedigree.com.

Founded in Portland, Ore., in 1955, Banfield is the largest general-veterinary practice in the world. In 2007, Banfield joined the Mars, Inc. family of businesses, and today has more than 975 hospitals across the United States and Puerto Rico. More than 3,500 BANFIELD® veterinarians are committed to providing high-quality veterinary care for three million pets annually. The BANFIELD® brand’s charitable arm, the Banfield Foundation, was established in 2015 as a 501(c)(3) nonprofit organization dedicated to improving the well-being of pets and communities. Press seeking additional information are invited to visit Banfield.com or call the Media Hotline: (888) 355-0595.