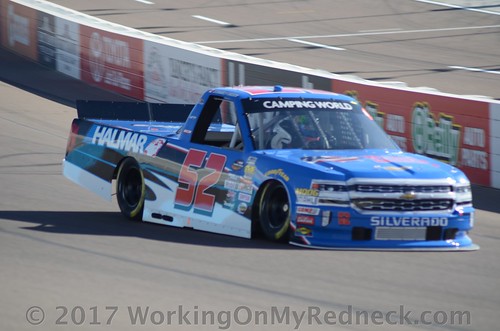 Stewart Friesen and Halmar Friesen Racing (HFR) are returning to full-time competition in the NASCAR Camping World Truck Series (NCWTS) in 2018. HFR will continue to receive technical expertise, equipment, engineering and support from GMS Racing, as well as a home for the No. 52 HFR truck in their shop.

For team owner Chris Larsen, maintaining the relationship with GMS was crucial. Following the formation of their alliance, Friesen and the No. 52 team had four top-seven finishes in the final seven races of 2017.

“We learned a lot last year and have improved our team in every way for the 2018 season. Stewart and I are very excited for the upcoming season and we have expectations to be very successful,” said Larsen.

With everything in place for HFR, Friesen looks forward to continuing his strong relationship this year with crew chief Trip Bruce, who, in addition to GMS, he credits for much of the team’s success last season. With Bruce at the helm, Friesen achieved 19 NCWTS starts, one pole and led 103 laps in the 2017 season.

“I am excited to get back to work this season with the team,” says Friesen. “We are well prepared and have the people and equipment to give us the ability to win on any given weekend and contend for the championship. Trip and the crew are some of the hardest working, most dedicated people I’ve ever worked with. They gave me a successful rookie season and I’m confident 2018 will be even better.”

The 2018 season looks to be promising for Friesen as he returns for his sophomore season with the same crew and sponsors from his breakout season in the NCWTS. In 2017, he took the pole position and led the most laps at Eldora Speedway during the series’ only race on dirt. His proven success on dirt tracks has made him one of the Northeast’s most popular modified drivers, but his performance in the 2017 truck series lent proof of his ability to race on asphalt.

While Halmar International remains the primary sponsor of the Build America No. 52 Chevy Silverado, additional sponsorship opportunities are still available.