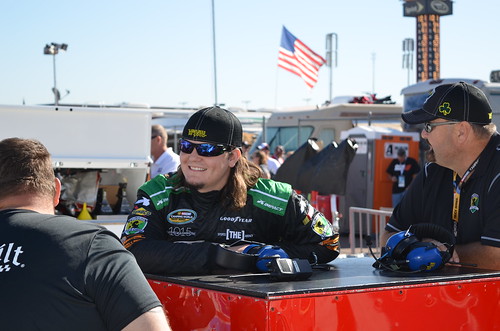 Newly-formed All Out Motorsports will run a partial NASCAR Camping World Truck Series (NCWTS) schedule in 2018 with Korbin Forrister as the driver.  The No. 7 Toyota Tundra team will make its debut at Daytona International Speedway on Feb. 16 NextEra Energy Resources 250.

Forrister is no stranger to the NCWTS, having 32 career starts in the series with a best finish of 12th at Daytona International Speedway in 2015.

Mooresville, N.C.-based All Out Motorsports is owned by Forrister’s parents, Ken and Karen Forrister.

“I’m excited to be back in a truck this year,” Forrister said.  “My parents figured if we were going to continue to race we might as well open our own team.  This year we will run a partial schedule with hopes to run a full season in 2019.  Right now we are still acquiring sponsorship and hope to add some additional races this year.”

“We shook down the truck last week at Charlotte (Motor Speedway) and had a pretty decent run,” Doug George said.  “Korbin (Forrister) is a good driver and is willing to learn.  We are looking forward to heading to Daytona (International Speedway) and seeing what we can do in the Camping World Truck Series race.”

All Out Motorsports will compete in the NCWTS at Daytona, Dover, Charlotte, Iowa, Chicagoland, Eldora, Michigan, Bristol, Talladega and ISM Raceway.