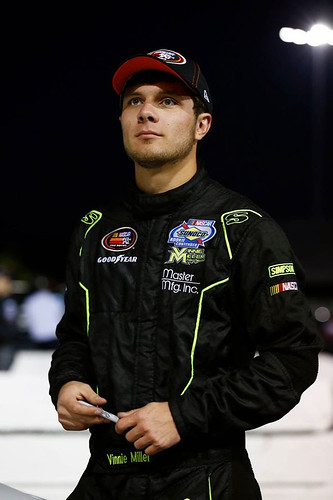 With just a couple of weeks to go til all three touring series unloads at Daytona International Speedway, those race teams are cranking up the activity in the shops in preparation for “the NASCAR Super Bowl”!

There are a few notable “newbies” that are arriving on the NASCAR scene this February.  In this installment of WorkingOnMyRedneck, I have the pleasure of talking with one of those “newbies”, Vinnie Miller.  For some of my longtime readers, you may remember that I had a conversation with Miller, we discussed his “resume” and his 2017 plans last summer.  Well, Vinnie has jumped to the big time, put together a package with JD Motorsports No. 01 Camaro, and will be racing fulltime in the Xfinity Series this year.

Recently I was able to talk with Miller, query him on his 2018 plan, and what follows is our conversation regarding those plans.

WorkingOnMyRedneck:  Vinnie now that you have had some time to reflect back on 2017, how would you analyze last season?

Vinnie Miller:  I had a good year, and I met some good people who helped me to further my career to the next step.  I led about 40 laps in the ARCA race at Michigan.  I was doing really good until I got collected in a wreck started by another car who drove it in too deep and put me into the wall.  The race car was very fast and I could have easily gotten a top five in that race if I had not got collected. Racing at Michigan was exciting because I grew up about 2 1/2 hours away from the race track and had about 40 friends and family there watching the race.

WOMR:  What specific things di you learn from your ARCA and NXS races that will help you this year with JD Motorsports?

VM:  I learned a little bit about drafting when I raced at Talladega in the NCWTS last fall and finished in 7th place.  I also learned that seat position is very important.  I got my foot in the door at Chicago with JDM and I found out that my seat position in that races was too low and that resulted in a lot of back pain after the race.  I also learned that these heavy cars cannot be “thrown around” at the race track like you can a late model.  There is a technique involved in getting these heavier cars in a good position to turn in the corners.  I learned that these cars need a lot more brake going onto the turns to slow down and you got to get back to the gas a lot quicker in the turns to get down the straights.  I found out that I like the bigger, heavier race cars better.  They are easier to read and to set them up for the race track.  I think that these heavier cars fit my driving style very well.   I like racing at these bigger tracks because they also fit my driving style better.

WOMR:  How did this JD Motorsports deal come about for you?

VM:  Towards the end of the ARCA season Phillip and Sandra, my agent and PR rep, were talking about the racing budget.  They said that it takes about the same amount of sponsorship dollars to go to a top-level ARCA team as it does to go to a mid-level Xfinity team.  So we went down to JDM and checked out their shop and team, and I really liked what I saw.  I really like the idea of running a full schedule.  I got along with everyone at the shop and it felt like a really good fit for this time in my career, and I am really looking forward to Daytona!

WOMR:  You have not raced at Daytona before, right?

VM:  No I haven’t, but I have been watching a lot of videos of the racing there.  I have taken notes about the racing there.  I have noticed that when you are three wide at Daytona the cars are from the apron all the way up to the wall.  Going 200 mph and three wide on this narrow track (Daytona) is something that I am just gonna have to get used to!

VM:  Yes am excited about returning to Michigan, Chicago, Talladega, and Bristol.  Michigan is close to my home so I will have friends and family there and that makes it cool.  I did very good at Talladega in the truck race last Fall, so I am excited to get back there again.  I also look forward to Bristol because you have to stay 100% focused all the time there.  With Bristol, it is a driver’s race track, and whoever can stay mentally focused the longest will do the best there.  One of the biggest problems with Bristol is that when you enter the turn, because of the high banking of the race track, you can not see all the way around the turn.  Additionally, the speeds there compound the banking problem because you are down the straightaway, into the turn, and through the turn before you know it!  You rely on your spotter for at least 50% of the turns.

WOMR:  Conversely, are there any race tracks that you are not excited about racing there?

VM:  Well I am not too excited about going to Martinsville because I know that place is a “wreckfest”.  That place uses a lot of brakes and there is a whole lot of “beating and banging” there.   So I am not really looking forward to that too much!  I know that Martinsville will be a driver’s race.  Whoever can hold on to their equipment the best and avoid the wrecks will have a good race.

WOMR:  The Xfinity Series does three road courses each year.  How much road course racing experience do you have?

VM:  The only road course race experience that I have is when I race go-karts on a few road courses when I was younger.  That was really a lot of fun.  It will be fairly sporty on the road courses, but I think that I will do pretty good on those road courses because If my “heavy foot” and my driving style!

WOMR:  What are your expectations for this Xfinity season?

VM:  I expect that our team will run from 10th place to as low as 20th place most of the time.  I think that I will score a couple of top ten finishes, at least that is my goal.  Another one of my goals is to win the Xfinity Rookie of The Year award.  I want to learn all that I can, including drafting, familiarize my self with all of the race tracks, and to always have fun.

WOMR:  Since you have not raced at Daytona before, what do you think it will be like coming out of turn four, “getting on the loud pedal” accelerating towards the tri-oval with the green flag waving for the start of the Daytona race in February?

VM:  Part of me will be saying “holy crap” I am at Daytona!  I have wanted to race here since I was 6 years old!  The other part of my will saying “ok you need to lay back and let all the people in front of me crash”!  I have watched a lot of the races and there is a lot of crashing early.  Last years’race was a big “wreckfest”.  If I just keep telling my self to “pace yourself” I should come out of that race with a top ten finish at Daytona.  Winning at Daytona is not always about being up front for the whole race, it is about pacing yourself.  For Daytona, you have to avoid the wrecks throughout the race so that you can race for the victory at the end.  That last few laps you just give it all that you got.  If you win you win, if you wreck you wreck!

WOMR:  Now that you have graduated to one of the three big stages of NASCAR, the NXS Series, what three things about you may surprise the readers?

VM:  (There was a long pause before answering.)  I am a big outdoorsman and I love to hiking and all of the outdoors.  I still work a part-time job during the week.  The third thing (with some long pause again) is that I am just a normal kind of guy.  It keeps me grounded and it reminds me where I came from.

WOMR:  Who is your “go to” guy or girl when you need help solving a problem, whether it is on or off the race track?

VM:  I normally go to Sandra Vorse, my PR rep,  She gives me great advice and is always on top of things.

WOMR:  When I am “Working On My Redneck” I am at the race track, whether it is dirt track racing, NHRA, NASCAR, or IndyCar races.  what are you doing when you are “working on your redneck”?

VM:  I am kind of a redneck myself!  I have my daytime job, I am hanging with everyday people, I fish and hunt, I shoot guns.  I basically am a redneck every day all day long!

As you can see, Vinnie Miller is just your everyday, easy going, well-grounded young man that just happens to be an up and coming race car driver that is up for the challenge of going 200mph, three-wide, at Daytona!  Oh did I mention that he has a heavy right foot?

Even though he will not be driving for one of the powerhouse NXS teams this year, keep your eye on him.  This young gun just may catch the eye of one of those powerhouse team owners as this season progresses.

2 Comments on “Pitting Outside The Box With Vinnie Miller”