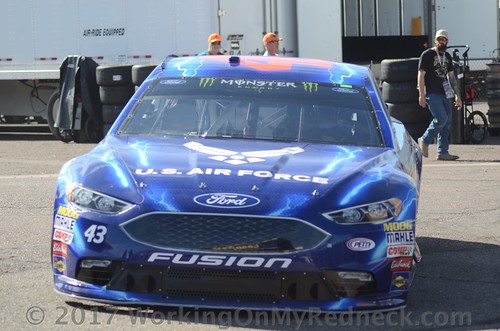 After years of starts and stops in a racing career that’s finally in gear, Wallace is set to compete in his first full-time season in Monster Energy NASCAR Cup Series racing.

What’s more, he’ll be driving the vaunted No. 43 fielded by Richard Petty Motorsports in partnership with Richard Childress Racing.

The significance is not lost on Wallace, who has finally taken the step that matters.

“I’m beyond excited,” said Wallace, the first African-American to drive full-time in NASCAR’s premier series in nearly 50 years. “I might not show it, but, man, this is it. We’re here. We’re at the Cup level. I’m one of the Cup guys walking around today on media day.

“I’m not an Xfinity guy, like ‘Oh, where’s such‑and‑such, he’s in the Cup Series.’  I’m there now, so it’s good. I’m ready to go. We’ve got a lot of stuff that has obviously changed over the offseason, switching over to Chevrolet.

“The new Camaro ZL1 is awesome looking, looks great, especially with our colors on there, that Petty blue touch to it.  Moving up camp to RCR, being on campus with them, so I’m adjusting to it all, and it’s all coming together pretty good.”

Wallace got his baptism in the Cup series last year, filling in at RPM for four races while Aric Almirola recovered from a back injury sustained in a ferocious crash at Kansas. Wallace was grateful for the opportunity, but it wasn’t his car—yet.

“Going into those four races last year, it was like, ‘OK, this isn’t my car, this isn’t my ride, no need to throw that extra little bit out there. Let’s just get through.’ And we ended up having some of the best races. We were on the cusp of fighting for a top 10 there at Kentucky. Just got edged out by my good friend (Ryan) Blaney there, so that was that

“It was good to learn in that whole process. I just wish there was that one more that year to see what we could have done at Loudon. Coming back into this year, it’s been so nice to walk into the shop and be like, ‘Hey, man, good to see you again.’ No restarting over. Maybe just learning names of the people that I didn’t meet from behind the scenes, front office people, parts room, stuff like that.

“That’s a new process for me. It’s one of those deals like, OK, we’ve got a good thing going here, so I’m excited about that. We’re ready to get to Vegas for our first on‑track test coming up here in two weeks—and then Daytona.”