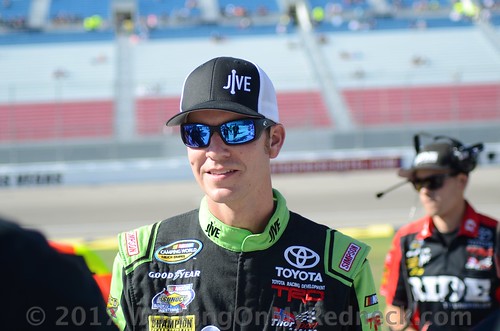 Grant Enfinger, the 2015 ARCA Racing Series presented by Menards Champion, will return to ThorSport Racing for the 2018 NASCAR Camping World Truck Series (NCWTS) season, piloting the No. 98 Champion Power Equipment/Curb Records Ford F-150. The Fairhope, Ala. native, who celebrated his 33rd birthday on Monday, led 41 laps en route to nine top-five and 15 top-10 finishes in his rookie season for the Sandusky, Ohio-based team in 2017, and plans to build on that success as he competes for the championship title in 2018.

“I couldn’t be more excited to be back with ThorSport Racing for the 2018 season, and also to be back with Ford,” said Grant Enfinger. “A good bit of my earlier years in the ARCA Series were with Ford, and with their support, we were able to go to victory lane quite a few times. I’ve always maintained a good relationship with those guys, and I feel that we can translate that into success in the Truck Series. I’m very thankful for the opportunity that Duke and Rhonda Thorson have allowed for us this year, and last. I know we can build on what we had last year, and make them proud by seeing their trucks in victory lane a lot this year.”

Enfinger’s 2018 campaign will once again be led by veteran crew chief Jeff Hensley, and the 2016 Talladega (Ala.) Superspeedway winner will continue his partnership with Champion Power Equipment, a market leader in power generation equipment, and Curb Records in 2018.

“This is a great opportunity for Grant (Enfinger), Jeff (Hensley), and the entire No. 98 team, to build on the success we started in 2017,” said David Pepper, General Manager of ThorSport Racing. “We look forward to having everyone back to compete for race wins and a championship title in 2018. As our driver line-up starts to take shape for the upcoming season, everyone at ThorSport Racing is working hard to get our Ford F-150’s built to compete at the top level of the series.”

Enfinger, who earned his first NCWTS Keystone Light Pole Award in the season-opener at Daytona (Fla.) International Speedway (2016), also has two wins in the ARCA Racing Series presented by Menards at the 2.5-mile track, and will make his fourth career NCWTS start in the season-opening NextEra Energy Resources 250 on Friday, Feb. 16. All the action will be televised live on FOX Sports 1, MRN and SiriusXM NASCAR channel 90 at 7:30pm ET.

Since 2003 Champion Power Equipment has earned a reputation for designing and producing the market’s finest power equipment. From our original headquarters in Santa Fe Springs, California Champion has expanded its North American footprint to include facilities in Jackson Tennessee, Milwaukee Wisconsin and Toronto Canada. Today Champion’s product line has expanded to include portable generators, home standby generators, inverter generators, engines, winches and log splitters. With over 2.5 million generators sold in North America, Champion is a market leader in the power equipment field. For more information visit: ChampionPowerEquipment.com.