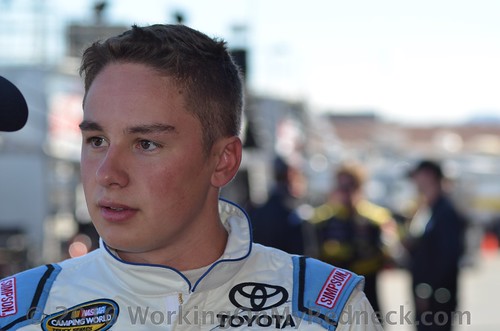 Kyle Larson had hoped for another epic battle night with Christopher Bell, about seven weeks after they thrilled fans at “Turkey Night” in California, where Bell beat Larson in a major midget-car race.

The stage was set Saturday night as they traded the lead at the Chili Bowl Midget Nationals, but a blown engine in Larson’s car with 13 laps remaining ended that drama, and Bell sped to his second consecutive Chili Bowl crown at the Tulsa Expo Center.

Larson and Bell had appeared to be the class of the field during the week of qualifiers, and they had a spirited match race in which Larson shoved Bell to capture the pole for the 55-lap event on the quarter-mile clay oval.

Larson was seeking that elusive Chili Bowl title, an annual event typically with more than 300 entries. Larson was fifth in 2016 and third in 2012.

“But, man, I’m disappointed. That’s the right word. I feel like Kyle got robbed, I got robbed and the fans got robbed.”

Larson, obviously, was more disappointed, especially after losing the lead to Bell on a restart early in the race and then taking it back when Bell got caught behind a lapped car. Larson appeared destined to earn that first Chili Bowl win when his engine went up in smoke.

“That sucks,” said Larson, the Chip Ganassi Racing driver who won four NASCAR Cup races in 2017 and whose 2017 Cup title hopes were thwarted by a blown engine in the NASCAR playoffs in October. “I had a blown engine here before getting close to the lead.

“But leading … I guess I can deal with it since I’ve dealt with it now, it seems like, the last few months. Just a bummer.”

“Anyone can win this race — it’s just about having that perfect night and minimizing their mistakes, which Kyle and Christopher are really good at,” Abreu said. “That’s what makes them the class of the field.”

Bell, who won the 2017 NASCAR Camping World Truck Series title, will compete in a full-time Xfinity Series ride for Joe Gibbs Racing in 2018. He could face Larson in stock cars when Larson runs in the Xfinity Series. Bell is looking forward to more battles with Larson in the midget cars, but he doesn’t know when their schedules will put them in the same event.

“At Turkey Night, we raced our butts off and I won, and here tonight, he had a motor blow up? His turn is coming,” Bell said.

Bell and Larson were the only two current NASCAR drivers in the main event. Kasey Kahne, Ricky Stenhouse Jr., Justin Allgaier, J.J. Yeley and Chase Briscoe failed to advance to the feature event. Stenhouse flipped in his heat race but was OK.

“Somebody hung a right and I was on the outside,” Stenhouse said. “It’s been a while since I flipped one. I forgot how it feels. It’s definitely not the easiest feeling you have.”

Could this Chili Bowl win for Bell be an omen?  Last year the Norman, OK native won the 2017 Chili Bowl and then went on to win the CWTS championship, could that be a prelude to him winning the 2018 NXS championship?  Stay tuned race fans!