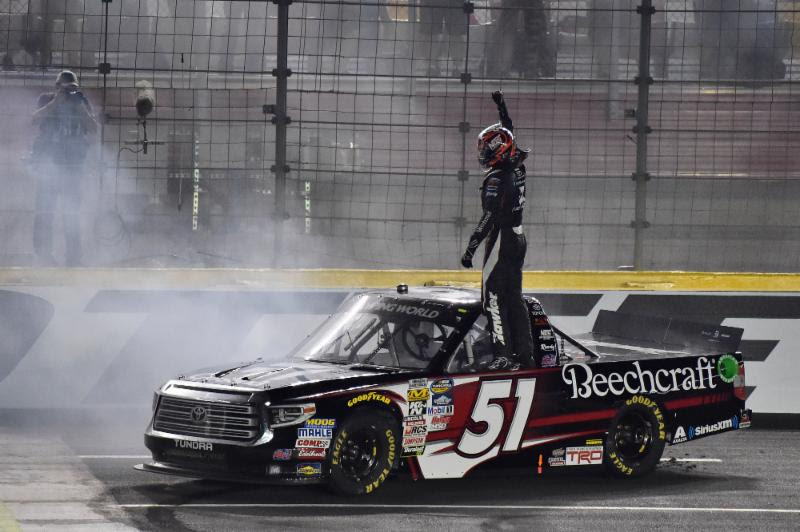 Kyle Busch Motorsports (KBM) announced today that owner-driver Kyle Busch will compete in five NASCAR Camping World Truck Series events in 2018. Busch’s Tundra will carry primary sponsorship from Textron Aviation, an aircraft industry leader that provides its customers with the most versatile and comprehensive general aviation product portfolio in the world. He will race twice behind the wheel of the No. 4 Tundra and three times in the No. 51 Tundra. KBM will promote Textron Aviation’s Cessna and Beechcraft brands through the partnership.

Busch enters the 2018 season second on the Truck Series all-time win list with 49 and is two wins shy of moving into a tie for first. The Las Vegas native has been victorious in a remarkable 35 percent (49/140) of his starts since debuting in NASCAR’s third division in 2001 and has finished first or second 52.1 (73/140) percent of the time. ‘Rowdy’ collected three wins, four top-five and five top-10 finishes across seven Truck Series starts in 2017. With 182 all-time combined NASCAR national series wins, he ranks second to NASCAR Hall of Famer Richard Petty (200).

“Our partnership with Textron Aviation and the Cessna and Beechcraft brands got off to a great start last year with two trips to victory lane and we have our sights set higher this year,” Busch said. “There are a couple of really cool things happening with my truck schedule this year — two of my races will be in the No. 4 Tundra, which was the number on my first Legends car back at the Bullring, and I’ll also be racing a truck at Las Vegas for the first time since 2001. It’s always fun to race in my hometown and it’s the only active track on the Truck Series schedule where I’ve made a start and haven’t visited victory lane — so hopefully we can change that in March.”