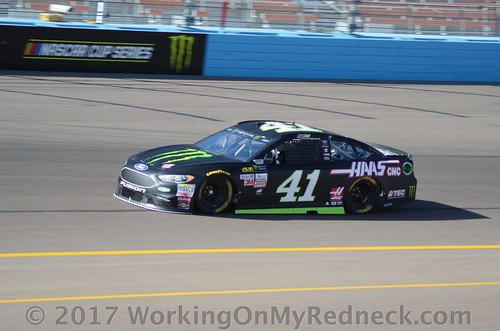 Stewart-Haas Racing (SHR) has announced its 2018 driver and crew chief pairings for its four teams competing in the Monster Energy NASCAR Cup Series.

Headlining the announcement is Kurt Busch’s return to the No. 41 Haas Automation/Monster Energy Ford Fusion. The 2018 season will mark Busch’s 19th year in the Monster Energy NASCAR Cup Series and his fifth with SHR. Five of Busch’s 29 career victories have come with SHR, highlighted by his victory in the 2017 Daytona 500.

John Klausmeier, a race engineer with SHR since 2009, has been promoted to crew chief for Aric Almirola and the No. 10 Smithfield team. Klausmeier comes to the job with a victory already as a crew chief. He served as the interim crew chief for the No. 41 team during the June 2016 race weekend at Pocono (Pa.) Raceway, which Busch won after leading the final 32 laps.

Rodney Childers returns as Kevin Harvick’s crew chief with the No. 4 Jimmy John’s/Busch Beer team for the fifth straight year. Since partnering in 2014, the duo has won 14 races, 15 poles and led 6,665 laps. They’ve been a member of the Championship 4 three times, winning the title in 2014.

Mike Bugarewicz begins his third year as the crew chief for the No. 14 Rush Truck Centers/Mobil 1 team in 2018. He was Tony Stewart’s crew chief in 2016, helping the three-time Monster Energy NASCAR Cup Series champion secure his 49th and final career win at Sonoma (Calif.) Raceway before retiring as a driver at the end of the season. Clint Bowyer took over the No. 14 Ford Fusion in 2017, delivering three second-place finishes in his first year with SHR.

“We have some of the finest talent in the industry and we’re confident in the leadership of each of our teams as we pursue wins and a championship in 2018,” said Stewart, co-owner of SHR with Gene Haas, founder of Haas Automation. “Obviously, we’re very happy to have Kurt Busch back with SHR and I’m proud to have Aric Almirola as a part of our race team. He’s someone I’ve always been impressed with since we were teammates at Joe Gibbs Racing, and John Klausmeier is more than ready to be his crew chief. The partnership between Kevin Harvick and Rodney Childers is the best in the garage, and after a bunch of strong runs and second-place finishes, I think Clint Bowyer and Mike Bugarewicz are ready for a breakout year. We’re in a really good place with each of our race teams.”

“We wanted to maximize our strengths and address the areas where we needed to improve, and we feel this lineup gives us our best chance to succeed every time we bring our Ford Fusions to the racetrack,” added Greg Zipadelli, vice president of competition, SHR. “This is a very technical sport, but it’s the people who make it go, and we’ve got some of the best people in the business.”