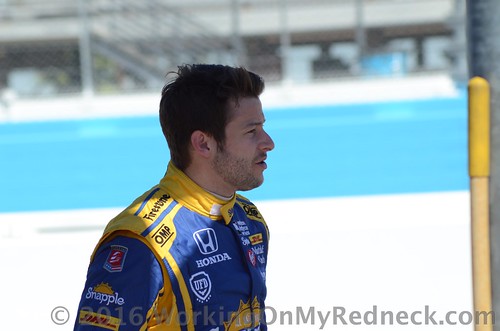 The checkered flag may have waved on the 2017 Verizon IndyCar Series season back in September, but that hasn’t slowed the pace for Michael Andretti and Andretti Autosport.

“What offseason? Man, it’s been flat out,” the team’s CEO said.

That’s because the battle of preparation with next year’s universal aero kit has teams doing all they can to extract every detail before the season opener on the streets of St. Petersburg in March. Andretti’s team received its first universal aero kit early this week from Dallara and immediately began the process to attach it to the Dallara IR-12 chassis.

For Andretti, there is much optimism entering next year after a 2017 that saw glimpses of a return to form. The team saw three of its four full-time drivers finish in the top 10 in the championship. Takuma Sato handed the team its third Indianapolis 500 win in the past four years in May. Alexander Rossi drove to an impressive win at Watkins Glen in September that planted his stake firmly in the ground as a contender.

All series entries will compete with the universal kit in the 2018 season, following three seasons of aero kit competition between manufacturers Honda and Chevrolet. With the opportunity to be on equal footing with rivals in that respect, it presents a potential game-changer in Andretti’s mind.

“I hope so,” he said. “I think we’ve stepped up our game as a team, so that’s nice. Starting on even ground (with the universal kit), I’m hoping that with all the changes we made, that hopefully we’ll do a little bit better than our competition.

“I’m sure everybody up and down pit road is saying the same thing, but I’m hoping that, starting new, we’ll be able to find things that the other guys won’t.”

Andretti is a major proponent of retaining continuity within the team. From the engineering staff to the drivers, the only significant change for 2018 is rookie Zach Veach replacing Sato, who signed with Rahal Letterman Lanigan Racing. All four of the team’s full-time drivers – Rossi, Veach, Marco Andretti and Ryan Hunter-Reay – are locked into multiyear deals.

“Absolutely, that helps,” said Michael Andretti, shown above with Hunter-Reay (left) and Rossi (right). “That helps a lot. I’m excited about the next few years that we’re not going to be talking about who is going to be in what car and all that stuff, and we’re going to be able to just focus on the plan of making our cars and our team better.

“It’s going to be nice not having that distraction.”

Paul “Ziggy” Harcus, the race strategist for Sato this past season, credits much of the positive change to Eric Bretzman, who joined Andretti Autosport as technical director following the 2016 season.

“I think that engineering has picked it up,” Harcus said. “Eric Bretzman has done a great job of keeping those guys pointed in the right direction of what we want and what we need to get our qualifying better. That always helps our races.

“I think the team as a whole, we’re making steps. If we keep doing that next year, we’ll be better than the Penskes and the Ganassis as well. So we’re all good with that.”

Although manufacturer testing has begun, Andretti Autosport hasn’t been able to put a driver on track like fellow Honda teams Chip Ganassi Racing and Schmidt Peterson Motorsports. Andretti accepts the blame since his team was deciding whether to stay with Honda for 2018 or switch to Chevrolet when Honda had to select its manufacturer test teams.

“It’s a little frustrating that we haven’t been able to play with it,” Andretti admitted, “but it’s a little bit of our fault because we made our decision so late (to remain) with Honda that they had to make their plans with somebody else in case we weren’t there. It hurts a little bit that we’re not involved in any of these tests, for sure.”

Andretti Autosport hasn’t had a driver finish in the top five in the standings since Marco Andretti was fifth in 2013. Its last champion was Hunter-Reay in 2012. With the new aero kit expected to necessitate a more technical type of driving, the team owner believes his drivers can move back to the top.

“I think that ever since the (previous) kit came out (in 2015), that Marco and Ryan haven’t been the Marco and Ryan that we’ve known and there’s something in it that I think was screwing with them somehow,” said Andretti. “So now, getting back to a more conventional type of race car, I’m hoping that it’s going to be good for those two and get them back up front where they need to be.”

One place where Andretti Autosport has remained up front is on the historic Indianapolis Motor Speedway oval. With Rossi and Sato winning the past two Indy 500s, Andretti has a chance in May to become just the third team owner to win three in a row. Only Lou Moore (1947-49) and Roger Penske (2001-03) have accomplished that feat.

“Last year, we knew we had a little bit of an advantage there because that was one that, luckily for us, Honda seemed to be a little bit better than the Chevys,” Andretti said. “So that was a good thing. We’re not going to have that this year, so hopefully Honda is just going to give us more horsepower and then that will help us.

“It’s going to be tough. I mean, winning it once is really tough. Winning it three times in a row is going to be really, really difficult, but anything is possible.

Texas Motor Speedway By The Numbers