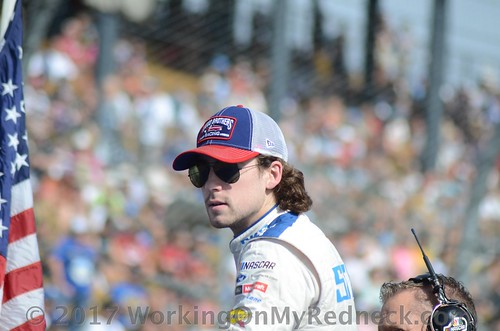 Bringing new opportunities to one of the most enduring partnerships in racing, Team Penske announced today that PPG is expanding its relationship with the organization in 2018.

Team Penske and PPG will celebrate their 34th season together in 2018 with the company reaffirming its commitment by becoming a primary sponsor of the team’s No. 12 Ford Fusion driven by Ryan Blaney in six Monster Energy NASCAR Cup Series (MENCS) races next season.

As part of the enhanced program, PPG will also serve as an associate sponsor for Blaney – one of NASCAR’s up and coming young stars – and the No. 12 Ford for the balance of the MENCS season. The company will also continue as an associate sponsor on all Team Penske cars competing in the Verizon IndyCar Series and both DJR Team Penske entries racing in the Virgin Australia Supercars Championship.

“PPG has been a trusted and valued partner with Team Penske for over 30 years as one of our longest-tenured sponsors,” said Roger Penske. “It has been exciting to see the partnership grow over the last three plus decades and we will work together as we continue to build the PPG brand through an increased presence with our team in the Monster Energy NASCAR Cup Series.”

“Having Ryan Blaney behind the wheel of a Team Penske car sponsored by PPG is going to make for a thrilling season – one we’re really looking forward to,” said John Outcalt, PPG, vice president, global automotive refinish. “Penske and PPG have always had a winning tradition. Together we’ve shown we’re a force to be reckoned with. And with Ryan on the track, we’re looking to add to our joint legacy.”

Team Penske and PPG established their partnership in 1984 through PPG’s participation in motorsports and sponsorship of the PPG Cup from 1979 to 1999 in the CART Series, where Penske Racing teams competed. The opportunities between the two companies started with PPG providing paint for Penske’s race cars. Over the years, the relationship has grown and PPG has become Penske Corporation’s largest supplier of refinish coatings for its racing, truck leasing and automotive collision repair subsidiaries.

“It’s great to see some of our current partners step up and become a part of the No. 12 team for next year and beyond,” said Blaney, who will turn 24 during the off-season. “PPG is a name and that everyone recognizes. They’ve been a part of Team Penske for a long time, so it’s great to see them strengthen their support of our group. I’m excited to see the PPG car on the track the first time.”

The 2018 NASCAR Cup Series regular season begins with the 60th anniversary running of the Great American Race, the Daytona 500, on February 18.  PPG’s first primary race will be the Auto Club 400 at Auto Club Speedway on Sunday, March 18.

About PPG
PPG: WE PROTECT AND BEAUTIFY THE WORLD™
At PPG (NYSE:PPG), we work every day to develop and deliver the paints, coatings and materials that our customers have trusted for more than 130 years. Through dedication and creativity, we solve our customers’ biggest challenges, collaborating closely to find the right path forward. With headquarters in Pittsburgh, we operate and innovate in more than 70 countries and reported net sales of $14.3 billion in 2016. We serve customers in construction, consumer products, industrial and transportation markets and aftermarkets. To learn more, visit www.ppg.com.
We protect and beautify the world is a trademark and the PPG Logo is a registered trademark of PPG Industries Ohio, Inc