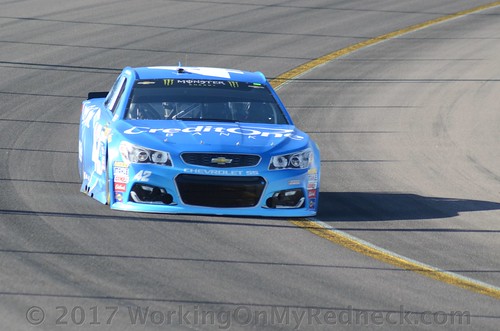 After a successful first season with Kyle Larson and the No. 42 team, Credit One Bank, the Official Credit Card of NASCAR, will expand the relationship with Chip Ganassi Racing (CGR) by becoming the largest sponsor of the No. 42 for the 2018 season.

Credit One Bank, who first partnered with CGR in 2016 for several races with the No. 1 team, will also continue as an associate sponsor with Jamie McMurray and the No. 1 team in 2018.

For video of the 2018 Credit One Bank paint scheme, visit https://youtu.be/gNEGKv6yZ5c.

·         In the Bank: Larson wasted no time earlier this season taking advantage of the new stage point structure implemented by NASCAR. Larson earned points in each stage of the first five races, and was the first driver to reach the 100-point mark from stage finishes. On the year, Larson scored stage points in all but 16 stages, and won a total of eight stages.

·         Second to None: With four victories in 2017, Larson greatly added to his career win total in the MENCS, and with eight runner-up finishes he has also bested his previous high in that category (three), which he achieved in 2014 and 2016. Two of those runner-up finishes came while driving the Credit One Bank Chevrolet. Larson rounded out the year with 15 top-five finishes, with only three of those finishes not being a first or second-place result. Larson’s strong season netted him a career-best eighth-place finish in the final point standings.

·         25 Going on 30: Behind a growing fan base and greater success on the track in 2017, including his second straight trip to the playoffs, Kyle Larson was named to Forbes 30 Under 30 in Sports 2018 list. Larson was the only motorsports athlete on the list, which also included Jose Altuve, Julio Jones, and Kawhi Leonard to name a few.

Laura Faulkner, Vice President of Marketing Communications, Credit One Bank: “Credit One Bank is thrilled to continue our partnership with Chip Ganassi Racing, the No. 42 team and Kyle Larson by becoming the leading team sponsor. Through this relationship, we are able share the Credit One Bank NASCAR credit card benefits with millions of race fans. We look forward to seeing the No. 42 Credit One Bank Chevrolet Camaro during the Daytona 500 and other additional races in 2018.”

·         Steve Lauletta, President, Chip Ganassi Racing: “We are very excited to yet again grow our relationship with Credit One Bank. We have enjoyed an exciting first year with them on the No. 42 car up to this point, and look forward to seeing their paint scheme on the track much more in 2018.”

·         Kyle Larson, Driver No. 42 Credit One Bank Chevrolet: “It’s great that Credit One Bank will be expanding their partnership with our team next season. It’s been cool to see their excitement and interest in our team and NASCAR grow throughout this year. We’ve had some exciting races with them on board, and hopefully there’s more to come next year.”

About Credit One Bank:

Credit One Bank, N.A. is a U.S.-based national bank that specializes in credit cards. Credit One Bank focuses on providing a full range of credit card products with cash back rewards that suit consumers’ everyday needs. Credit One Bank is one of the top Visa issuers in the U.S. as well as the Official Credit Card of NASCAR and the Vegas Golden Knights. For more information, please visit CreditOneBank.com.

Chip Ganassi has been a fixture in the auto racing industry for over 30 years and is considered one of the most successful as well as innovative owners the sport has anywhere in the world. Today his teams include four cars in the Verizon IndyCar Series, two cars in the Monster Energy NASCAR Cup Series, two cars in the NASCAR XFINITY Series, two factory Ford GT’s in the IMSA WeatherTech SportsCar Championship, and two factory Ford GT’s in the FIA World Endurance Championship. Overall his teams have 18 championships and more than 190 victories, including four Indianapolis 500s, a Daytona 500, a Brickyard 400, six Rolex 24 At Daytonas, the 12 Hours of Sebring and the 24 Hours of Le Mans. Ganassi boasts state-of-the-art race shop facilities in Indianapolis and Concord, N.C., with a corporate office in Pittsburgh, Pa.

TIL NEX TITME, I AM STILL WORKING ON MY REDNECK!